This week’s installment is about the secret of abduction. No, not alien abduction. And not kidnapping people, either. I mean abduction as in abductive reasoning. Abduction is defined by Wikipedia as “the process of arriving at an explanatory hypothesis of a surprising circumstance.” The foremost philosopher of abduction, Charles Sanders Peirce, summarized abduction as follows:

The surprising fact, C, is observed;
But if A were true, C would be a matter of course,
Hence, there is reason to suspect that A is true.

At its core, abduction is guesswork, but it forms the basis of all natural science, medical diagnosis, and indeed much of human thought. When Newton developed the laws of gravity based on observing the motion of falling bodies, he was using abductive reasoning. When a physician is presented with a set of symptoms and diagnoses an illness to explain the symptoms, he is using abductive reasoning.

Abduction is also the method used by conspiracy theorists worldwide, when they observe surprising facts about our world and piece together sinister explanations for them. America has its share of conspiracy theorists, such as 9/11 Truthers, but it is in Italy that conspiracy theory has been refined to its finest art form. The Italians have coined the word dietrologia for the art of finding hidden motives to explain seemingly everyday events. As explained in the Guardian, “rampant suspicion is the reason Italians love the dinner part game of dietrologia, in which participants try to out-trump each other with paranoid ideas…”

We have much to learn from the dietrologists, for abduction is the secret art of any successful gamemaster. Abduction is what transforms random tables and wandering monsters into a living, breathing game world. Abduction is what transforms a hodge-podge of materials into a coherent campaign. It is the art of finding explanations that make the campaign better. You must study this art, master it, the way Miyamato Musashi studied sword-fighting. 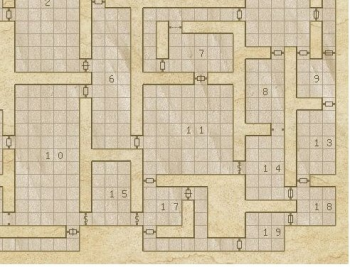 Examples of abductive reasoning in RPGs abound. For example, in my Classic Dungeons & Dragons campaign, my party of adventurers has been exploring another world in their crystal sphere, filled with strange and alien beings. To fill up this new setting I have been liberally adapting unused encounters and dungeons for use in the new world. One such encounter was an ettin in a jail cell. Ettins are common enough in the Auran Empire from whence the adventurers hailed, but were not a creature that was native to the alien world they were now on.

Now, outside of the context of the game, the reason an ettin might appear is simply that he had been created for a different dungeon in a different campaign, where his presence would not have been surprising. But on the alien world, his presence was odd indeed and demanded justification or removal. I could have simply changed the ettin into another creature more appropriate to the new world. But I didn’t – instead, I abduced why an ettin might be present.

So, the surprising fact: An ettin on an alien world.

My abduction: If there was a strange portal through space and time that swept up creatures from the Auran Empire and deposited them on the alien planet, the presence of an ettin would be a matter of course.

My conclusion: There is reason to suspect that a mysterious gate through spacetime exists on the alien world.

By simply importing a legacy encounter from an old dungeon I had laying around, I have suddenly concluded that a mysterious portal exists somewhere that brings in creatures from the old world to the new. If I had simply changed the ettin into an alien, this portal would not have existed, and the game world would be a less interesting place.

Note that I did not start with the idea of the portal – I started with the arbitrary appearance of the creature. This is not cause-effect reasoning; it’s the opposite. It’s finding an explanation for something that didn’t have one – an explanation that made the campaign better. 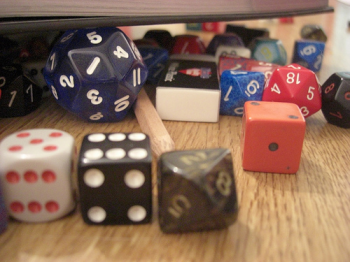 Making Abduction Work For You

The art of abduction depends on having a set of “weird facts”, that is, a circumstance you need to explain. Fortunately, such facts are never in short supply. Indeed, the easiest and most accessible method of brainstorming available to any gamemaster is random generation of facts. Hundreds of game accessories, in print or online, can randomly generate content for you – random adventure generators, random magic swords, random taverns, random jewelry, random monsters, and on and on.

For example, with a single click on the random adventure generator above, I randomly created a dungeon called “The Weird Citadel of Secrets.” One of these was Room 45, which noted “there are cracks in the floor here” and “treasure: 500sp, 20gp.” The weird fact here is “there is treasure in an otherwise empty room with cracks in the floor.” I abduced that “if the treasure belonged to adventurers who had fallen into the cracks in the floor, this would make sense.” And, presto! The cracks in the floor became large, menacing cracks which must have broken under the feet of some hapless hero, whose precious wealth lingers there still.

A second method of generating “weird facts” is through adaptation – porting content from other sources into your campaign setting. For instance, in the Auran Empire, I’ve made use of old D&D modules such as Isle of Dread, Against the Giants, and City of the Gods, each of which came from a different campaign setting (Mystara, Greyhawk, and Blackmoor respectively). You can do the same with articles from Dragon and Dungeon magazine or various internet sources; modules from other game systems; ideas stolen from your favorite TV shows, movies, and books. My ettin from earlier is a great example of this.

A third method of generating “weird facts” is to rely on your players, who are (assuredly) an endless source of weird. For instance, at some point, in our Classic D&D campaign, one of our players – who runs Zeodarë, a cleric of Ianna, goddess of love and war – decided her character’s retainer was also her lesbian lover. I had previously determined that clerics in the campaign world were celibate, which meant that either (a) the player was playing wrong (i.e. her cleric could not take a lesbian lover), (b) her character was breaking the vows of her order, or (c) there was a reasonable explanation to be abduced. I abduced that Ianna did demand celibacy with regard to marriage between man and woman, but permitted her clerics to take a lover of the same sex. This interestingly made the campaign more interesting…

Abduction on the Go

Abductive reasoning is so powerful and useful that you can use it to run entire adventures on the fly. All you need is a bunch of interesting and completely unconnected events, and some players prone to conspiracy theorizing. For example, in a game of Cyberpunk 2020, I’ve often just grabbed a copy of the Night City Sourcebook and rolled some random encounters. I might roll that “a convoy of US Army troops rolls up from South of Night City… towards an embarkation point” and “an agent on the corner is recruiting parties of Cyberpunks to move small, valuable commodities from Night City to various parts of the world.” I could abduce that if the agent had ties to the US Army, and was selling a “surplus” of the very same commodities that the US Army troops had, then these two events would be a matter of course.

That instantly leads to other considerations – are there military police that are aware of the agents’ activities that will seek to re-capture the “surplus”? Are the buyers enemies of the US who cannot be trusted to leave the Cyberpunks alive after the transaction? Are the “surplus” goods of such value as military hardware that the players might want to steal the whole shipment?

Carrying the example further, let’s imagine that during the course of play, the Cyberpunks are attacked by three commandos carrying smartguns on a black operation. One player wonder wonders aloud “how did these guys find us?” Another player figures it out: “There must be tracking emitters in the cargo we’re carrying!” The group immediately scans its precious cargo, and I reveal that, indeed, there are tracking emitters that have clued in the military to their location.

Except, of course, there were no tracking emitters until the players thought of it, and there was no “it” to figure out at all. The commandos were simply a random encounter (random encounter 00 on the After Midnight Encounters in Night City table, to be exact). I hadn’t yet abduced that the commandos were tracking the player characters; I knew when I ran the encounter that the random table said there was a commando attack. I rewarded the player characters for their insightful act of abduction by having them be correct that there were tracking emitters, and allowing them to remove them.

Abduction, then, is truly a black art – akin to the quantum mechanics of a role-playing game world. Explanations for the facts of the game world may not exist until they are consciously observed; until then they are merely potential explanations, ideas floating in the seas of possibility. Abduction is how you plunge into the ocean of ideas and finds the best ones to explain the facts you’re dealing with in your game.

At this point, you might have realized that I’ve shown you how to get some facts with which to generate abductive conclusions; and I’ve given you examples of my own abductive reasoning; and I’ve given you some suggestions of how to use it to run spontaneous games; but I haven’t actually explained how to abduce. But that, sadly, I cannot explain: It’s an intuitive leap.

As Musashi said in The Book of Five Rings, “it cannot be clearly explained in writing. You must practice diligently in order to understand.”