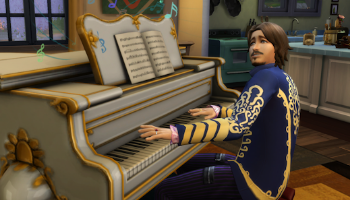 If The Sims 4 does one service to the world, it’s this – it displays the folly of propping up a game with a ton of downloadable content and expansions, then wiping the slate clean with a sequel and expecting people not to notice. EA Maxis’ long-awaited followup to the ultimate voyeur’s fantasy already courted controversy when it was revealed the game would be missing popular items like swimming pools and toddlers, and the list of absent features only grew from there.

After everything that had been added to The Sims 3, this new game feels like a hard reboot to factory settings, brushing away a lot of what fans have come to enjoy without really adding much in the way of fresh content. While some may argue that it’s unrealistic to expect all the expansions and DLC from The Sims 3 to show up in the sequel, I’d argue it’s equally unrealistic to try and turn back the clock on everything we’ve gotten used to and not expect anybody to notice. In fact, with Electronic Arts’ predilection for DLC well known, it’s hard not to be cynical and view this as a bare-bones core, something upon which we’re all expected to bolt extra content onto at a price.

It doesn’t help that, in addition to not adding any of the extended content, the basic game appears to be suffering from multiple reductions in its own right, leading to a game that feels inadequate in the face of its predecessors.

There are tweaks to the gameplay, that much is true. Sims can now multitask, able to play on their phone while chatting, or dance and schmooze at the same time. The gibberish-spewing demihumans are also capable of expressing a wider range of emotions, and maintaining their good mood while performing tasks that capitalize on the current emotion often turns out to be a quicker, trickier balancing act.

There are more options for creating your own Sims and building their homes, with an improved user interface that makes customization swifter and more convenient. It takes only a few moments to pull, stretch, and dress your Sim to fit your exact needs, though the color options are lacking and the menus for buildings can still prove a little too cluttered when trying to find things. That said, searching for objects by name is a nice touch, allowing one to find trash cans or television sets without having to pour over menus.

Once your Sim is out in the world, you’ll notice that the “world” itself isn’t exactly a land of opportunity. Your chosen town will be broken up into various sections, and you’ll need to sit through a loading screen every time you want to go from your home to the park, or from the park to the nightclub. In an industry that strives for bigger and better with every sequel, it’s surprising to see a game that’s chosen to erect more walls and impose further limitations on its environment. It’s now a hassle to move from place to place, and the world consequently feels smaller as a result of the division. 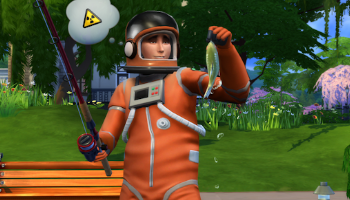 This sense of reduced scale is felt all throughout the game. While I spent days upon days with The Sims 3 and found myself constantly surprised and endeared, it took a handful of hours before I couldn’t stand the thought of opening The Sims 4 to watch my Sim eat, sleep, and work, with very little to shock or delight me in between. The new emotions that Sims can feel are cute at first, but one soon cycles through them all, and you’re just left with a staler, minimized version of everything The Sims 3 did. Without the wealth of interactive objects we’d gotten used to in previous installments, one is often at a loss to do much but repeat the same tedious routines, and more often than not I simply sped the game up and let my Sim behave with complete autonomy. There just isn’t a lot in it for me to get much more invested than that.

It doesn’t help that the game is pretty damn buggy. My main Sim’s last status was that of a man with a frying pan perpetually glued to his hand, and I’ve also lost considerable amounts of progress thanks to a number of hard crashes. It’s not the buggiest game I’ve ever seen, or even the buggiest game Electronic Arts has ever had the nerve to release, but it’s annoying nonetheless – especially since glitches like my Sim’s frying pan are reported to have appeared in the last game too!

Visually, the game looks enhanced from the last outing, but not dramatically so. The titular Sims have more vibrant animations, appearing much more alive whether taking selfies or getting into fights with idiots. The silly music and nonsensical Simlish voice acting are out in full force, which is at least pleasant.

The Sims 4 isn’t bad, exactly, it just sure as hell isn’t particularly good. In cutting out the fluff and focusing on the core gameplay, EA Maxis has forgotten that fans LIKED the fluff, and the core gameplay was simply a conduit to obtain all the distracting nonsense and silly toys. Call me cynical, but it seems to me that this fourth installment will become a conduit for all that … we’ll just be expected to pay more to get it.

By far this game’s biggest crime? It’s boring, and The Sims should never be boring. Existing as merely a shell compared to the experience we’ve gotten used to over the years, a husk when put up against the kind of content we know exists and know will be sold to us at a later date, there’s just not enough meat on the bones to make The Sims 4 a worthy successor to its predecessor. All it did was make me want to go back and play the last game in the series, and that’s really not a good thing.

Also, my GOD, the tutorial messages that never end. On and on. Harassed by a videogame. Like there’s not enough of THAT online.

Bottom Line: The Sims 4 is basically The Sims 3, but shrunken and sterile. While some tweaks and enhancements are nice, none of them can offset the overall lack of engagement provided, and the looming promise of DLC is no compromise.