Note: This article contains spoilers. Lots of them.

A stoic reflection on the futility of existence, Samuel Beckett’s famously dull tragicomedy Waiting for Godot – in which two men wait endlessly for someone that never arrives – shares something in common with videogame stories that, as an industry, we never seem to address: The characters don’t change.

Sure, they change appearance, gun, location, allegiance, job, and, more often than not, from being alive to being dead. They modify everything except the one thing that counts, the one thing we might remember them for long after the credits have rolled: themselves. They may have thwarted the apocalypse, but so what? What have they learned from the experience, what about their attitude, outlook, or personality has changed and in what way have we been inspired to change also? Besides a few hours of entertainment, what has the player actually gained?

Narrative isn’t “stuff that happens.” It’s a carefully constructed sequence leading to a satisfying resolution. Similarly, good storytelling isn’t measured by complexity or plausibility but emotional gratification. And no matter what form they take – whether a fish, robot, rat, or toy – the hero must experience inner conflict and develop as a character. To illustrate, we’ll need a crash course in narrative theory. Hold your breath.

Based on Joseph Campbell’s concept of the “monomyth” (literally “one myth”) described in his 1949 book The Hero with a Thousand Faces, Christopher Vogler’s The Writer’s Journey describes twelve common structural elements to which all stories adhere in some form. Vogler called the precise moment of change the “Resurrection,” the moment the hero is reborn having accepted and absorbed the lessons of the journey, either through – or enabling them to resolve – the wider conflict:

“The higher dramatic purpose of Resurrection is to give an outward sign the hero has really changed. The old Self must be proven to be completely dead, and the new Self immune to temptations and addictions that trapped the old form.” (Vogler, 1992)

This is the moment Luke turns off his targeting computer to instead “use the force” in Star Wars, the moment Batman bears the brunt of Harvey’s misdeeds to save Gotham’s collective soul in The Dark Knight, the moment that categorically proves the hero has accepted the lessons of everything that has come before. In other words, the point of the thing.

Now, to briefly explain conflict: External conflicts are physical obstacles or challenges that games rely on to carry the action: battles, races, puzzles, arguments, and so forth. Internal conflicts, meanwhile, are the hero’s emotional barriers or personality flaws: insecurity, egotism, anxiety, moral uncertainty, etc. They are the part of the hero that makes the audience truly question the hero’s worth, the conquest of which is demonstrated progressively as the story unfolds, culminating in a single decisive moment: the Resurrection.

While we may never pilot a spaceship or mow through an Orc army, internal conflicts are universal; we face them every day. Seeing our heroes overcome this part of themselves shows us we’re also capable of overcoming adversity. In Waiting for Godot, Vladimir and Estragon experience internal conflict from the very beginning – whether to continue waiting or just leave. But they never act on this impulse. They never overcome. They never change. 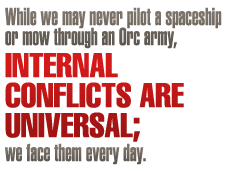 To examine this a little closer, let’s talk about a game that, for everything it does right, leads to a conclusion oddly lacking lasting affect: BioShock.

As an unwitting child of Rapture, our hero Jack spends the game scavenging to survive – appropriating anything from food to ammo to the lives of young girls. Choosing whether to harvest or save the Little Sisters dictates the outcome of the story – whether to abuse them as per the player’s actions throughout, or hand them the key to Rapture. Remember, the climax of Jack’s character arc is not the external conflict with Fontaine but this pivotal decision afterwards.

While the Resurrection may seem present here, the moment lacks emotional gravity and the problem lies in Jack himself. He’s a blank slate. He does not have the capacity to change or learn because he never was anything to start with. There is no point that unequivocally tests Jack’s resolve simply because he has none. So instead imagine if Jack was characterised as a criminal on a last-ditch quest for redemption (regardless of the later story revelations). Learning the value of human life in a failed objectivist utopia where it is paradoxically devalued – by not harvesting the Little Sisters – would demonstrate his desire and capacity to grow as a character and, perhaps in doing so, find a new reason to live. Conversely, harvesting them would create a tragic character arc, demonstrating the hero’s ongoing reluctance and inability to change.

The moment of Resurrection following the Fontaine battle would need to be reworked accordingly. If the player has harvested the Little Sisters, perhaps they turn on Jack in violent retribution; while Jack has saved Rapture from Fontaine, his continuing selfishness is ultimately punished. Save them, however, and Jack is put to his final test, forced to choose between sacrificing himself so the remaining Sisters may survive (proving he’s successfully absorbed the lesson of Rapture) or harvesting them all to escape. By choosing the honorable death – appropriate to his character until this point – the player would see a definitive final change in Jack. His sacrifice shows us even the disgraced are capable of redemption.

Moving on to a game where the Resurrection takes a different form: While a heart-warming story of love, courage, and loss of childhood innocence helps make Ocarina of Time one of the most celebrated pieces of videogame storytelling, subtle characterisation and a superbly crafted final act ensure the experience sticks with you.

The structure of Ocarina‘s finale follows the final phases of Vogler’s journey note-for-note. After first confronting Ganondorf in an Ordeal, Link is Rewarded with Zelda’s freedom, then must escape the castle on The Road Back. The moment of Resurrection occurs when Link delivers the decisive blow to Ganon following the final battle of courage versus power, good versus evil. The end.

Well, obviously not, no. There is a second moment of Resurrection earned by the first. Link and Zelda are characterized as those indirectly responsible for unleashing the evil in the first place, and in order to return peace to Hyrule they must undo their experiences together by sacrificing their adult lives. Through the epic battle the player learns power can be conquered by courage and wisdom, but only through redemption and sacrifice may we have peace.

However, the Resurrection does not necessarily need to be a conscious choice, or even a choice at all. So finally we come to Braid.

Following a series of illogically numbered chapters, Tim enters the attic and faces the Ordeal of the fire chase and is Rewarded with the Princess’ freedom. But the Princess runs from him and a terrible realization dawns as she thwarts his pursuit during The Road Back. Here the character change is only one of perspective, occurring the very moment Tim and the player realize the Princess’ captor from the beginning of the sequence is actually her savior. The change in the flow of time has Resurrected Tim from the delusion of his own virtue: He is – and has always been – the villain. The purpose of Tim’s journey was never to rescue the Princess, but to learn this crucial truth about himself. Tim is forever changed.

In Silent Hill 2, James is Resurrected from his repressed self when he confronts his involvement in Mary’s death and climactically fights Maria – the sexy, vivacious embodiment of everything his wife never was. In Prince of Persia: Sands of Time, the Prince is Resurrected from his former egotism when he accepts his adventure really was “just a story” to Farah and the wider world. Internal conflict and character development create the stories we remember the most.

There are myriad reasons why game narrative quality is so disparate from other forms of entertainment, and countless more why that fact goes largely ignored. Perhaps, through our quest for immersion and desire to project ourselves onto our heroes, we assume a character that begins as an amnesiac blank canvas must end the same way. Perhaps developers believe players would rather hang around with a jingoistic, superhuman muscle sack than anything less-than-perfect. Perhaps they’re right. Or perhaps as an industry we’ve become so involved with action and gameplay, we’ve forgotten the purpose of storytelling: To say something meaningful in an entertaining way.

Haven’t we let this problem slide long enough? Regardless of medium, the interesting part of any story isn’t how or indeed if the good guy wins, but what rather we learn about ourselves from their experience. Otherwise we’re just killing time. Like our heroes, we’re Waiting for Godot.

Jon Davies is a screenwriter, novelist and games tester from the Midlands, UK.