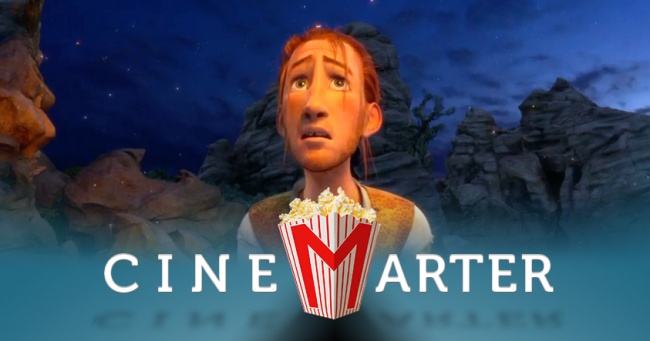 The Wild Life should be thankful that Norm of the North exists – for the sole reason that it’s been prevented from being the worst talking animal movie of 2016. In almost any other year, The Wild Life would be the worst theatrically released animated movie of the year. But not 2016. Formerly titled Robinson Crusoe – I guess it was changed because that isn’t marketable to four-year-olds – the Belgian-created film should have stayed overseas or, if it had to come over here, should have gone straight to VHS. Y’know, so nobody in their right mind would watch it.

The film is presented to us as a loose adaptation of Robinson Crusoe, a novel by Daniel Defoe you’ve hopefully heard of. The catch, done to make it appeal to children, is that it’s told primarily from the perspective of a bunch of animals who befriend Crusoe (Yuri Lowenthal) after he finds himself stranded on an island. They have a couple of zany adventures, all while being harassed by a duo of evil housecats (shipcats?), because high stakes don’t exist in this movie.

Also absent: jokes, excitement, quality animation, strong voiceover work, an interesting story, or pretty much anything whatsoever that might compel anyone over the age of three to give it more than a second-long cursory glance before realizing that it’s utterly terrible. The only reason to watch The Wild Life is the same reason people slow down to look at a car crash. You want to see what went wrong and what damage was caused. The disappointing thing is that The Wild Life is so boring that it’s not even engaging on that level, like a Foodfight! or something. It’s more likely to act as a sleep aid than a laugh-inducer.

It’s likely that the first thing you’ll take away from even just the trailer for The Wild Life is the hideous animation and art style. There’s a serious lack of polish and detail on every single aspect of the animation. Now, it was made in Belgium and on a small budget, but I’m growing less certain on whether that should count as an excuse. Budget animated films – often times knockoffs of more expensive popular movies – aren’t uncommon, but they usually don’t populate cinema screens and force us to pay theater prices to see. If you’re a distributor and you decide to release your movie theatrically, it’s going to be measured up to the standard of other theatrically released fare. And The Wild Life is an atrocity when compared to its competition.

The Wild Life has been saved from being the worst animated movie of the year only by the simple fact that Norm of the North was released into theaters.

The Wild Life‘s plot is almost inconsequential, even though it uses a flashback framing device – one guesses to try to feign effort. At the beginning of the film, Crusoe is rescued by pirates, and then the parrot explains how we got to this point. It takes the majority of the time to get back to the pirate ship, during which time: Crusoe is shipwrecked, tries to hunt the animals, then befriends the animals, and then … that’s basically it, really. There’s so little going on here, both story-wise and thematically, that I hardly even know what to say. When you’ve got a terrible movie that wouldn’t even be able to hold the attention of a two-year-old, one who is typically amused just by moving images, what more is there to say?

I guess I could talk about how the vocal work – performed largely by people you, probably for good reason, have never heard of – is unenthusiastic and inconsequential. Or how the dialogue could’ve been written by a one-year-old. Or how the action moves back and forth between slapstick and moderately violent, neither of which works to any degree. Or how most of the animals are annoying – and how their personalities are so flat that you have to wonder if they were initially written as one character and then separated to give more voice actors a paycheck.

The Wild Life has been saved from being the worst animated movie of the year only by the simple fact that Norm of the North was released into theaters. But that it’s even a discussion should be damning enough. It has atrocious animation that wouldn’t pass muster in 2000, let alone 2016, an ugly art style, indifferent voice acting, a boring story, incredibly low stakes, and zero laughs. The world’s least-discerning newborn would look at The Wild Life and give it a downward-facing thumb and a stuck-out tongue.

Bottom Line: The Wild Life is garbage masquerading as a movie.

Recommendation: Don’t see it. Don’t think about seeing it. Send a message that this isn’t okay.