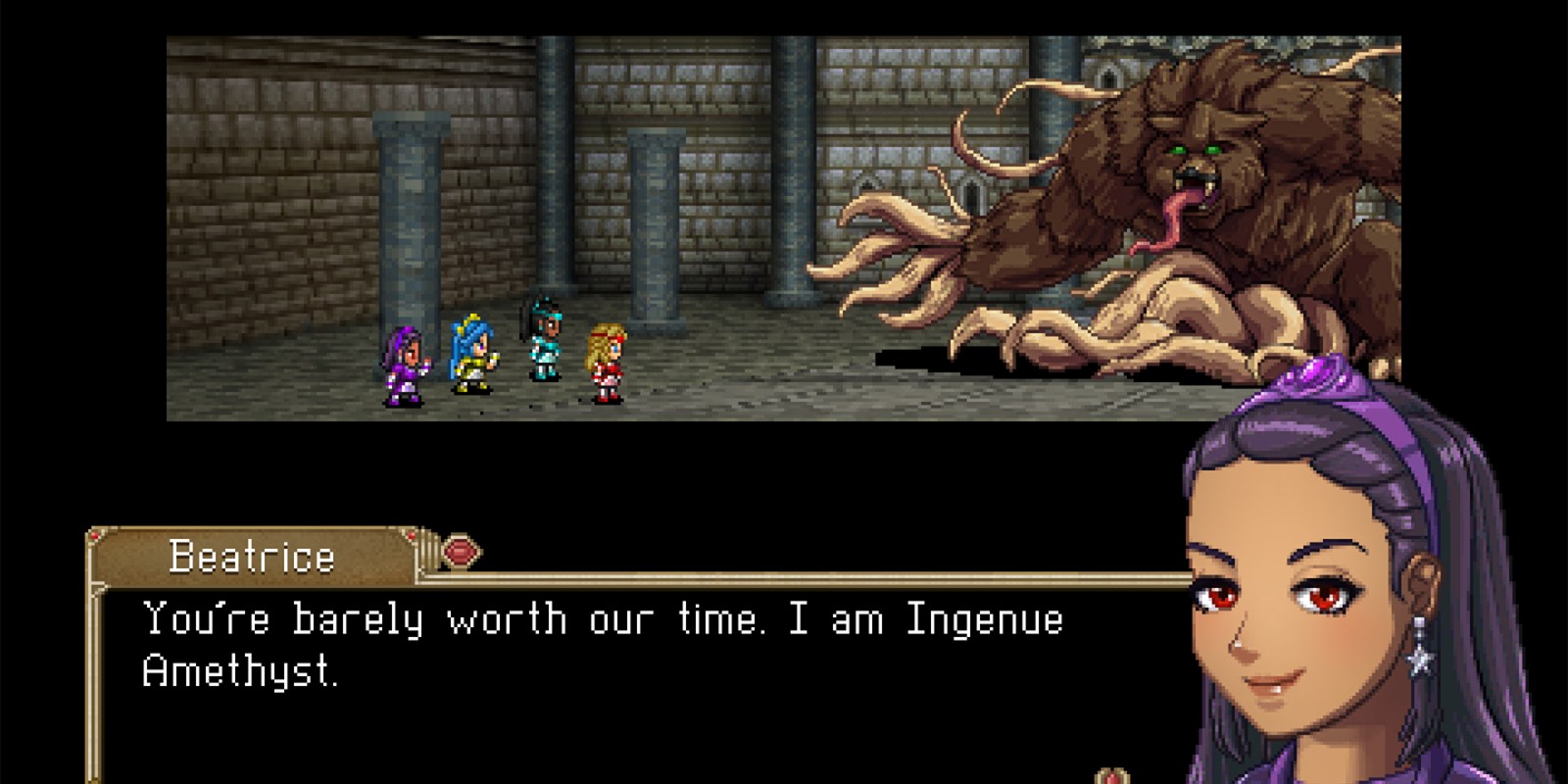 Have you ever wondered what it would be like if an RPG combined Sailor Moon magical girls with the collective works of William Shakespeare? Of course not, but indie developer Zeboyd Games fortunately did, and so we have This Way Madness Lies for review on PC. It takes a fun but bizarre premise, sprinkles on most of the gameplay mechanics from prior game Cosmic Star Heroine, and results in a pretty solid appetizer RPG to supplement your other gaming.

A Series of Stuff That Happens

This Way Madness Lies doesn’t so much have a story as it does a series of linear, disconnected events that justify getting into lots of fights. Six (eventually seven) Shakespeare-loving girls compose the Stratford-Upon-Avon High Drama Society at their school, where they put on different plays across the course of the school year. But at the same time, gateways starts opening to alternate realities that take place in the actual worlds of Shakespeare plays — and those realities are full of monsters for some reason. The girls use magical powers they’ve obtained to extinguish the monsters, solve problems for characters in these alternate realities, and shut the gateways between worlds.

You don’t actually find out why any of this is happening until the very end of the game, and even then it only makes the slightest sense. But the game has several elements that elevate its otherwise vapid narrative. For one thing, the random social outings that the girls go on in-between missions and school plays feel like the slice-of-life adventures that Sailor Moon would go on in different episodes. There’s absolutely no substance or thematic value to any of it (unlike in Sailor Moon), but it’s still enjoyable for its own sake, like eating sugary breakfast cereal. 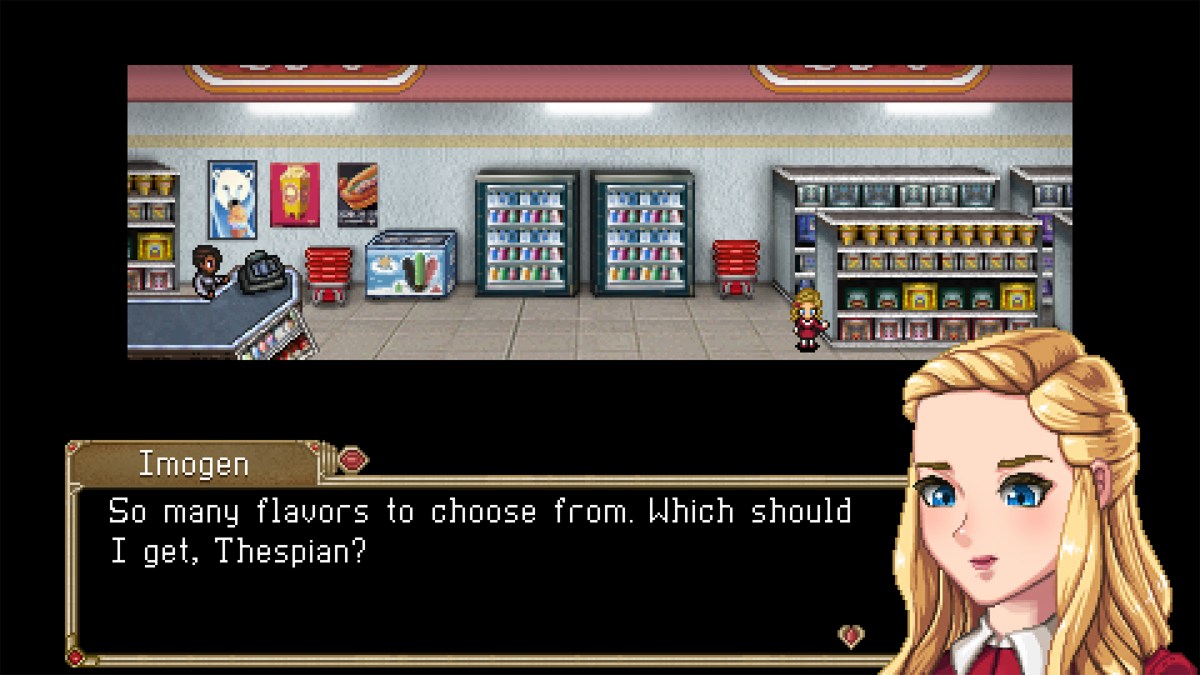 All of the cinematics in This Way Madness Lies occur basically in “stop motion,” in that you almost never see animations; people and objects just suddenly snap to where they need to be for the next action. It’s an unusual stylistic choice, but it doesn’t hurt anything. These scenes also play out in a “cinematic” aspect ratio, presumably to save budget by drawing less art, but that’s fine because all of the environments are beautiful. From arcades to convenience stores to the pet shop, it’s all extremely enticing, even if you only see them in cut scenes. (You typically only directly control your characters during dungeons.) Character portraits aren’t as attractive, but they get the job done.

Zeboyd does do one surprisingly innovative and silly thing with the game script though. During school plays or in alternate Shakespeare realities, Zeboyd provides two different versions of the game script that you can instantly cycle between just by pressing “right” or “left.” There’s “Ye Olde English,” and then there’s a “New English” translation, which is often just an excuse to make goofy jokes. And a lot of the gags are genuinely giggle-worthy, so it ends up being an imaginative addition.

The game breaks the fourth wall to acknowledge you and have you make small narrative choices sometimes too, so there is a bit of extra replay value. It even results in a different minor boss fight at one point. 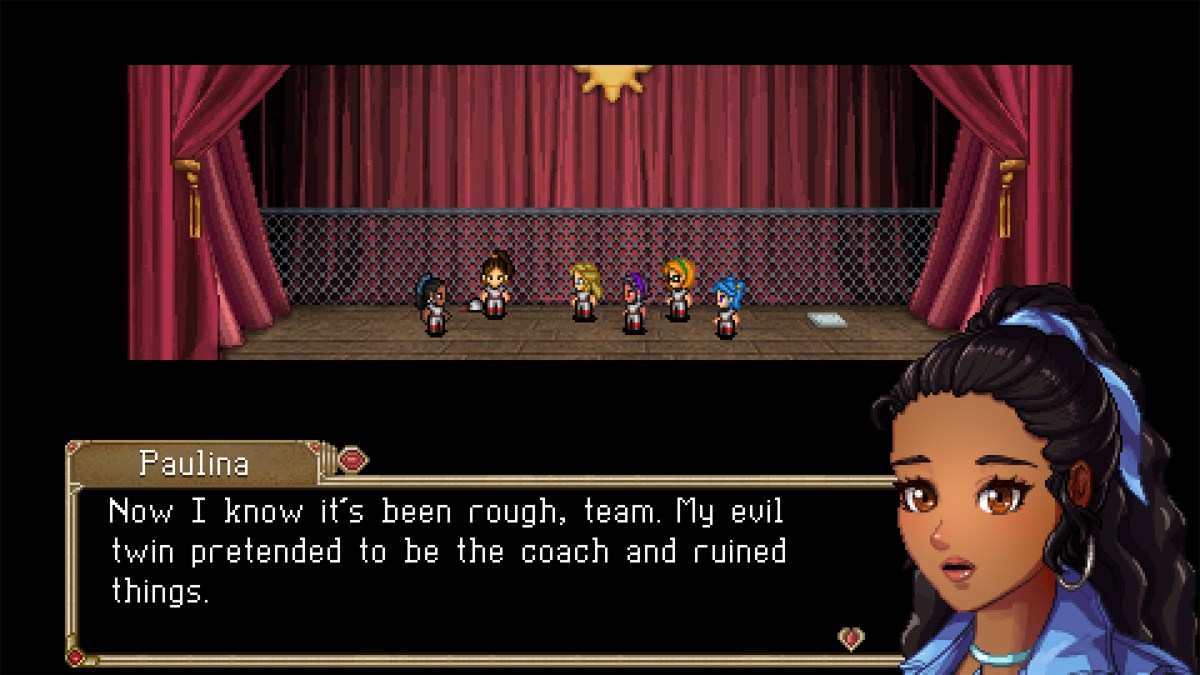 About 80% of This Way Madness Lies will just be spent in combat. Battle maintains the aforementioned cinematic aspect ratio, but with large animated characters and enemies that directly evoke Shining Force. Typically, it looks terrific, especially the huge boss enemies. Despite the fresh look though, this game imports most of its battle mechanics from Cosmic Star Heroine, which is fine because that game had a fantastic battle system.

Combat is turn-based with a party of four, and you can use any ability you have without an MP cost. To “recharge” all of a character’s abilities to use again, you just have to spend one round defending. Each character has unique abilities and traits that unlock as the team collectively levels up, and there is deep, enjoyable strategy in selecting which ones to equip. Each character pairing also has one-time-use combo abilities. The game dictates who is in your party most of the time, but for the last couple dungeons, you finally get to decide party composition yourself for maximum strategy.

My favorite innovation imported from previous Zeboyd games though is how items are used. There are only a few items in the game, and each one is distinct. You choose which ones to equip, just like with abilities, and they can be used repeatedly — but only once per battle. It’s another excellent contribution to strategy and eliminates the item hoarding that exists in most RPGs. 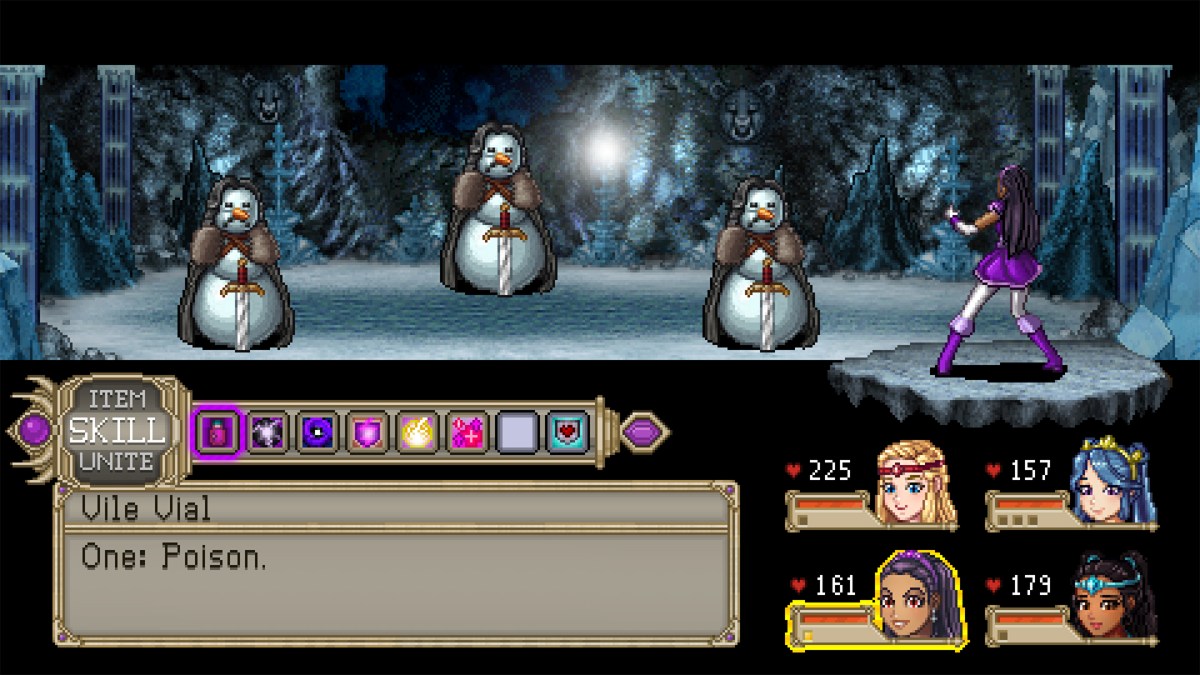 This Way Madness Lies will specifically tell you the elemental strengths and weaknesses of enemies, but taking advantage of status effects is also crucial. Some enemies are particularly susceptible to stun and charm effects, while others are susceptible to having their defense cut in half. It feels almost mandatory to inflict poison on all enemies.

But there’s no one right strategy to get through all situations, which is rare and delightful in an RPG. Often, everything comes down to timing, especially because party members enter a “Hyper” state at set intervals where their abilities have different and increased effects. All in all, Zeboyd has shown here once again that it has one of the best RPG battle systems around. It’s just a slight shame that Zeboyd didn’t do more to mix up its already successful formula. Also, it’s difficult to understand the meaning of some ability descriptions, so I just avoided using those abilities.

The game’s dungeons are basically simple mazes with just enough twists and turns to demand you pay attention in order to find all the treasure. Enemies appear on screen to initiate battles and do not respawn once defeated (but you can trigger additional fights on demand from the status menu), and you can avoid some fights if you want. I decided to kill everything so as not to risk being underleveled, though it seems the developers didn’t intend for me to do that. 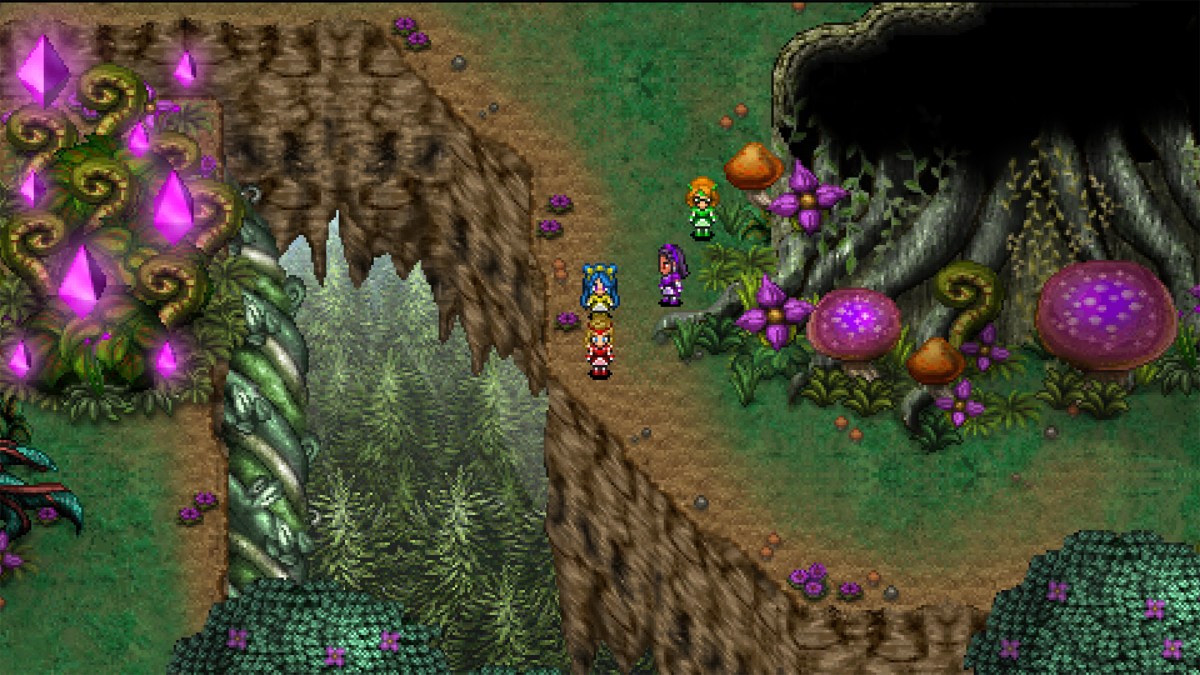 This Way Madness Lies has four difficulty levels that you can cycle between at any time, which affects enemy HP and damage dealt. Easy is extremely easy, and Moderate is also usually easy — so I spent most of the game on Challenging and didn’t try Hard. Challenging finally becomes true to its name late in the game, but in truth, I dropped the difficulty for the final dungeon because the tedium of constant battles against large groups of enemies with a huge amount of HP had finally caught up with me.

This Way Madness Lies claims to be four-to-five hours long, but it’s lowballing itself; I spent 10 hours on it playing mostly on Challenging. If I had played the game two hours at a time instead of in just three sittings, maybe I would not have found the end of the game so exhausting. In any case, the ability to shift difficulty according to your mood is extremely convenient and ensures anyone will be able to finish the game.

Before wrapping up, it’s worth briefly reiterating that this is very much an indie game built by two people, and it should be approached with those expectations. There are some abrupt screen transitions. I got stuck in the environment once and had to do a save-and-quit-and-load to get out of it. Some graphics overlap on the wrong visual plane. I walked through a closed door once. It could all use just a bit more polish.

And this is a severe nitpick, but there are some vocal tracks in the soundtrack that I personally found extremely annoying. The rest of the soundtrack was nice though. 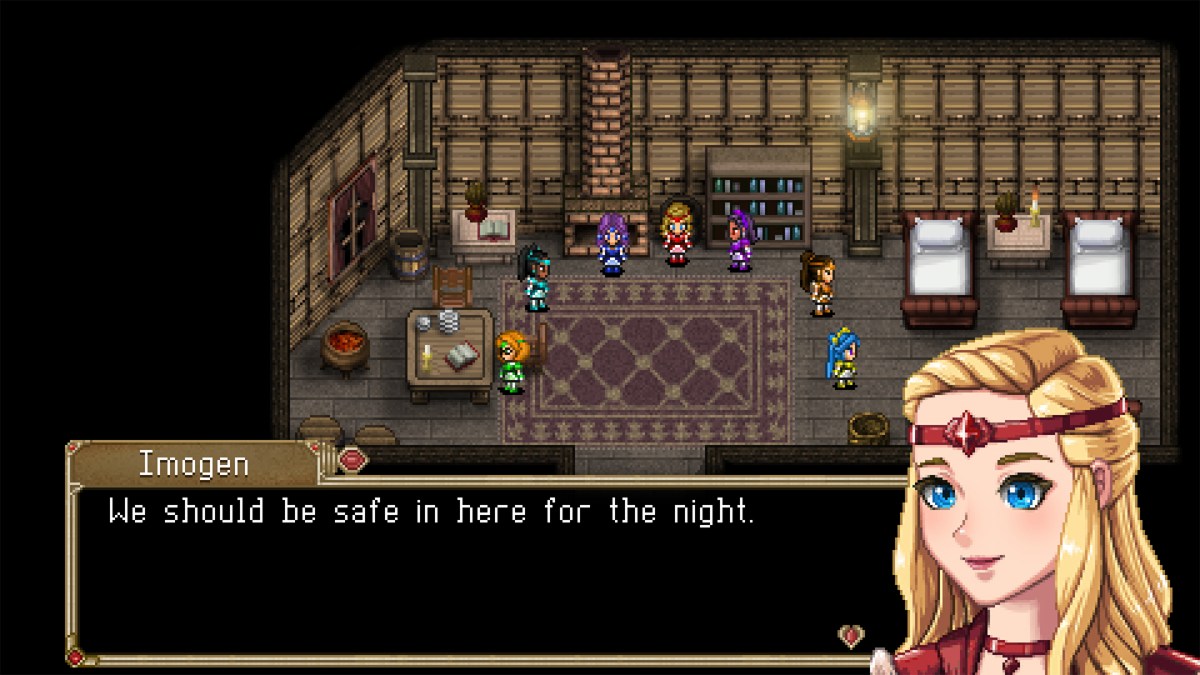 The Review Verdict on This Way Madness Lies

This Way Madness Lies is the quirky, messy, quality RPG that could only be born in the indie scene. It doesn’t all fit together perfectly, and the story is simultaneously imaginative but also frivolous and insubstantial. However, the combat is excellent and demanding, and the pixel art does a lot of cool and impressive things (including full magical girl transformation cinematics). Overall, it’s no masterpiece, but the game succeeds at being what it wants to be — a bite-sized RPG that you can play and enjoy in small doses. You don’t have to be a Sailor Moon or Shakespeare lover to enjoy it, but it will certainly help if you are at least one of the two.

A PC review code for This Way Madness Lies was provided by the publisher. 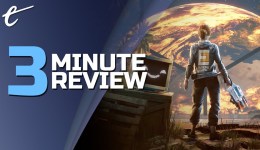 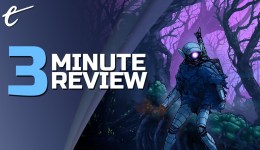 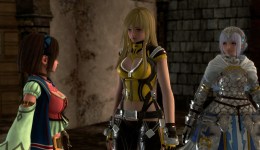 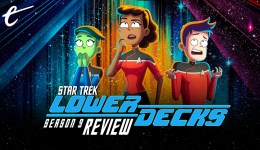