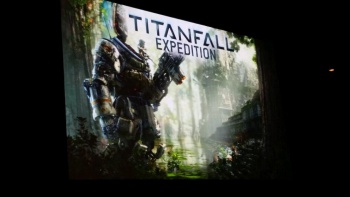 Titanfall players will be getting a 2v2 Last Titan Standing mode, and Titan burn cards in a free update, separate from the DLC.

As to be expected, Titanfall, this year’s big triple A shooter, has a season pass, so developer Respawn Entertainment is hard at work cranking out DLC map packs. Today at PAX, it has announced that the first of these packs, Expedition, will arrive next month, in May, 2014. It will contain just three maps, and have a price tag of $10 (or, $25 when purchased in the Season Pass).

As for the three maps, “Swampland,” is a stretch of alien ruins that offers trees for wallrunning, “Runoff,” is a map that incorporates water, and “War Games,” is a map that’s hosted within the game’s training simulator.

Meanwhile, all Titanfall players will be getting a free update in the near future, which, as promised, will introduce some new game modes. The example Respawn gave was a 2v2 variant of the Last Titan Standing mode. It is also planning to add Titan-specific burn cards, and Titan insignias to the game, as well as something called “Rifts”, which will introduce various tweaks to already-existing modes (possibly like Left 4 Dead 2‘s mutations)

The company added that it was looking in to ways to make the newly released private matches more viable, such as adding a way to filter games through hashtags.

So there you have it, $10 for three maps. It does seem a little sparse, considering competitor Battlefield 4‘s map packs contain four maps apiece as well as new weapons, but to be fair it is also slightly cheaper than BF4‘s DLC price. Having the game modes and the burn cards as a free update gives hope that new weapons and Titans will also be free.