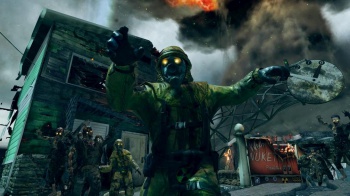 Black Ops 2 players will no longer be penalized for getting booted out of a multiplayer match.

Activision’s latest entry in the Call of Duty franchise may be selling just fine, but the online mode has been hampered by a particularly unfortunate bug that can lock players out of joining public matches. In a pair of recent tweets, developer Treyarch notes that a patch has been launched to fix the error, as well as unlock the Nuketown Zombies map for additional players on Xbox 360.

The multiplayer bug in question relates to the game’s new “probation” system. When playing Black Ops 2 online, the game keeps track of how many times you quit out of public matches, and how frequently. If you’re found to be abusing the in-game abort option, you’ll be placed on probation, which locks you out of public matches for various lengths of time, starting at just one minute.

Unfortunately, Treyarch forgot to consider how often players get booted out of public matches because of host glitches and other errors, and the game was – up until now – counting all of those instances against the players. Now, the system will only tally against your total number of quits when you abort of your own accord.

Treyarch is also adding the ability for Season Pass holders on Xbox 360 (players who paid upfront for all future map unlocks) to play the previously retail-exclusive Nuketown Zombies map. Before this change, only players who paid for either the “Hardened Edition” or “Care Package Edition” of the title were allowed to experience the new, undead take on the classic Nuketown map.

Both tweaks should go live today for Xbox 360 owners, while PS3 and PC players will only be able to look forward to the fix of the probation system.

Submit Your Questions for the Upcoming Miracle of Sound Q&A!