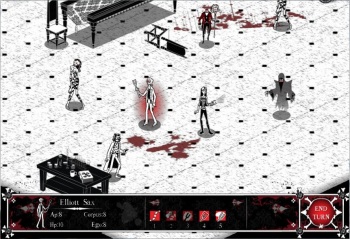 The man behind Haunts: The Manse Macabre says the collapsed Kickstarter has a new lease on life.

Haunts: The Manse Macabre got a lot of press last week as a cautionary Kickstarter tale when project mastermind Rick Dakan revealed that despite being successfully funded to the tune of nearly $29,000, it had effectively collapsed after the two programmers on the project left to do other things. But now it appears that the game may have some life left in it after all.

“We’re going to finish developing Haunts: The Manse Macabre as an Open Source project. The source code has been open from the beginning, but now we’re going to fully embrace open development model and making the game entirely open source,” Dakan wrote in the latest Kickstarter update. “We’re still in the process of setting up the infrastructure for issue tracking, source control, documentation wikis, and other tools necessary before we can begin in earnest, but we hope to have that all up and running within the next week or two.”

Roughly 30 programmers have said they’d like to help out with the project and are now being surveyed to determine what they can work on and how much time they’ll be able to devote to the project. Indie studio Blue Mammoth Games has also expressed an interest in taking on the game, with Dakan and artist Austin McKinley continuing in their roles on a part-time basis, although not until it’s is much closer to completion.

Blue Mammoth will “facilitate the retail release, get copies out to our backers, and help promote and distribute the final game,” Dakan explained. “Someone from Blue Mammoth will probably have a finger in helping out on the development side, but getting this game finished will be up to the community of volunteers.” He added that there are still “a ton of details” to work out relating to licensing, credit and business models, along with the usual organizational work like putting together a bug list and a priority chart, but expressed hope that the game could “come back from the brink of collapse.

“This is just the beginning,” he said, “but I’m excited about where it’s going and enthusiastic as hell about the support we’re getting.”

EMP Missile Is No Longer Science-Fiction