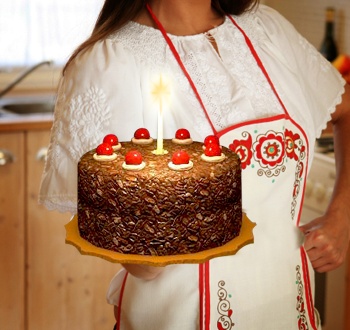 What would happen if you took foods from videogames and tried to make your own real-life tasty treats out of them?

“Your HP & MP have been restored! …but you’re still hungry.”

I’m sure almost every gamer out there in the crowd can recall his or her favorite videogame food. At some point, said gamer must have wondered, “Gee, I wonder what Fallout‘s Nuka-Cola actually tastes like?” In Issue 240 of The Escapist, Nova Barlow decided to put her cooking skills to the test and make some fictional dishes in real-life – consequences be damned.

World of Warcraft‘s Rock-Salted Pretzels (via Wrath of the Kitchen King):

Deep within the darkness of World of Warcraft‘s Blackrock Depths, you can find the Rock-Salted Pretzel, an excellent snack for any adventurer. They’re not particularly hard to acquire in the game: Simply make your way to the Grim Guzzler tavern and you’ll find a merchant selling the doughy snacks. In real life, the process is a bit more complicated than a simple bar run – something I didn’t realize initially. The process started out innocently enough by mixing, kneading and letting things rise. Then I knocked down the dough, rolled it out and cut it into strips. By my third attempt, I had the pretzel shape on farm status.

A few hours passed and I realized I was still making pretzels. I rolled, I shaped, they sat and I waited. There’s a lot of patience involved in this recipe, which is ideal for doing a quick round of daily quests, crafting some much needed potions for raiding or leveling your fishing skill. (It even provides an excellent excuse for leaving a dismal pick-up group: “Gotta go, need to check pretzels.”) After returning to the stove and dipping 13 pretzels into a pot of boiling salt water, letting them sit for a short bit on a paper towel and coating them with egg wash and coarse salt, they were finally ready to be placed in the oven.

To read more about her intrepid adventures into videogame cooking, check out “Press B to Serve” in Issue 240 of The Escapist!