Here’s a sentence I never could’ve guessed I’d be writing: A publicity photo of a shirtless Taylor Lautner convinced me to read the entire “Twilight” saga.

I should probably elaborate on that, huh?

A few months back, Summit Entertainment’s publicity machine made a big deal out of its first group shots of the “New Moon” werewolves. In any other genre film, this would mean a “money shot” either of CGI creations or actors in extensive makeup appliances. In “Twilight,” however, this means a handful of young male actors, uniformly bronze-skinned (Twilight’s werewolves are all Native Americans) and model-buff, standing around aloof and shirtless. Just as uniform as their look was the reaction of male movie-geeks, including yours truly:

Let me first explain: There’s no getting around the fact that these visions of the Twilight werewolves are patently ridiculous, even more so when you consider the pretzel-logic behind their existence: In “Twilight,” werewolves are humans who flash-morph into truck-sized canines, so they go about shirtless and in sweatpants so they can quick-strip and avoid having to constantly buy new clothes. The question, of course, as to WHY this magical-transformation can’t simply also explain the vanishing/reappearing of clothing (it makes just as much sense as several hundred extra pounds of muscle and bone appearing out of nowhere after all) need not be asked, as it is likely rather obvious: The “Twilight” engine runs on (heterosexual) female lust, and having it work this way allows author Stephanie Meyer an in-plot excuse to send a whole team of tanned, toned boys galloping near-naked through the woods. It’s fetishism and objectification; nothing more, nothing less.

In other words, the same thing that the rest of “genre fiction” (read: science-fiction, fantasy, horror, etc.) has been doing to its female characters since the first cro-magnon stepped back from his cave-painting and, after a moment’s consideration, concluded, “Yeah, those could stand to be bigger.”

It was dawning on me, then, that myself and every other male geek currently rolling our eyes at the laughably-obvious, pandering sexual-objectification of these “Playgirl werewolves” had at many times throughout our geek-existence been confronted (or, at least, needled) by our she-geek female compatriots about the laughably-obvious, pandering sexual-objectification of…well, damn near every depiction of the female form in geek culture.

And you know what? If we even tried to defend the point, we probably fell back on explanations and excuses every bit as shaky and transparent as “Twilight”‘s nonsense about its wolf men’s limited wardrobe budget: “In this future, spacesuit-polymers can be skin-tight and sufficiently-protective!” “Power Girl’s costume has what amounts to a cleavage-window because she’s still deciding on a logo!” “Female ninjas probably would use their sexuality as a weapon!” “Women in medieval-fantasy don’t need to armor anything but their nipples and crotch, cause their fighting-styles rely on flexibility! Especially the Elven Wenches!” 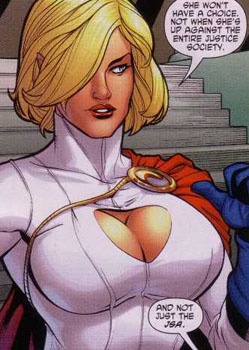 Long story short, this moment of clarity (or, at least, objectivity) got me to thinking that maybe I ought to try and actually read through the saga from this same perspective, i.e. “is this really that much worse than similarly silly franchises aimed more at, well, me?” Answer: Yes, yes it is. No amount of perspective or extra effort on my part (or anyone’s part) can turn Stephanie Meyer into a better writer or help her creations rise above the level of the absolute worst kind of genre-fiction – something discovered too late by directors Katherine Hardwicke, Chris Weitz and soon-enough David Slade. (But this isn’t the place to dwell on that – you want a thorough-savaging of the franchise itself, go watch the review.)

I bring these three disparate threads together – “Twilight” being awful yet massively popular, “Twilight’s” sexual-objectification of its male characters and the rest of geek-culture’s sexual-objectification of women – because I’ve come to regard them as interconnected: Female-targeted fetish-objects like the Twi-wolves (I’m blanking as to whether or not they had an official group-name) look preposterous to the mainstream (read: male) geek audience because the amount of geek-culture material actually aimed at a female audience is scandalously small, and that’s why crap like “Twilight” is able to become so popular – nature abhors a vacuum.

It’s the same principal by which Tyler Perry has made his ill-gotten fortune: Hollywood has done such a poor job in creating entertainment that appeals to the African-American middle class that almost any sufficiently well-marketed entry into the void was going to turn a profit. Just as Perry’s terrible films (and plays, and TV shows) stake their claim by being the only game in town for black audiences looking to see their community onscreen in something other than a low-end comedy (looking at you, Martin Lawrence) or “gangsta” shoot-em-up; “Twilight” offers younger female genre fans a world that, however shabbily-constructed, speaks to their perspective, experiences and fantasies (romantic or otherwise) in a way that almost nothing else on the radar does.

Face it, the vast majority of sci-fi and fantasy fare – and I mean books, movies, videogames, comics, and so forth – are written by and for men and boys. That doesn’t mean they don’t have female fans – far from it – but do take note that it’s a one-way street: The modern geek universe is littered with fellow travelers of the fairer sex who’ve found something to relate to in the ostensibly testosterone-dripping realms of the X-Men, or Star Wars with its instantly-erect laser swords and near-helpless slavegirl princesses; and the newer incarnations of quintessential boy-and-his-toys hero Dr. Who certainly have their lady admirers, but how often do you really hear about a female-targeted franchise crossing-over with men? (And no, “Buffy” doesn’t count: “Hot high-school chicks wrestling with monsters” was aimed at guys to start with; that Joss Whedon is a good enough writer that his geek fetish-doll heroines were genuinely relatable to women doesn’t change that fact.)

When it seems like nobody is paying attention to you, the slightest bit of attention paid by anyone can seem like a huge deal – come to think of it, it’s often one of the first things however-unconsciously noted by real-life “Bella Swans” right before they wind up in abusive, co-dependent relationships with the first real-life “Edward Cullen” who shows something resembling interest.

Now, am I saying that all this context somehow justifies or minimizes the blight of “Twilight?” Hell, no! In a way, I think it makes it worse. Bad art is just bad art, but what Stephanie Meyer (and her publisher, and Summit) are doing amounts to selling tainted water to an audience that’s dying of thirst in the desert. Plus, they’re driving down the value of the genre even further by occupying it. Anyone trying to pitch a good female-centric supernatural romance franchise will inevitably have their work compared to “Twilight” and taken less seriously as a result.

So while it’s all good and fun to bag on Meyer’s crappy books and their goofier fangirls, just keep in mind how hard it is out there for the women of geekdom. Their own culture relegates them to the subgenre-ghetto, and the “Twilights” of the world grow fat and wealthy keeping them there.