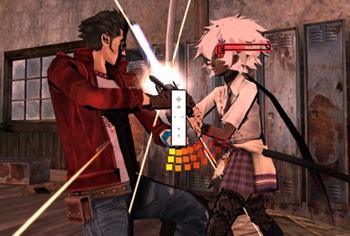 Apparently Ubisoft can’t get enough of Travis Touchdown’s thirst for violence and pastry based battle cries, as they’ve stepped up to the plate to publish the next installment of No More Heroes.

No More Heroes was like a glorious experiment, throwing out the rulebook for narrative and taking gamers on a wonderfully satirical and self-indulgent journey through the fourth wall.

Published in a chimera-like fashion by three different companies, it was Ubisoft that handled the North American leg of relay and it looks like Ubisoft has gotten a taste for the Suda51’s otaku anti-hero, because they’ve stepped up to the plate for No More Heroes 2.

Ubisoft’s involvement with the game was announced at their E3 press conference. “Ubisoft is excited to bring No More Heroes 2: Desperate Struggle to North American gamers. No More Heroes won countless accolades from both gamers and media alike, making the sequel one of the most anticipated core titles for Wii.” said Tony Key, senior vice president of sales and marketing at Ubisoft.

This new installment, more properly titled No More Heroes: Desperate Struggle, will see Travis once again battling UAA assassins, and will see the return of the mysterious Sylvia Christel and most importantly, will feature twin lightsabers beam katanas.

NMH: Desperate Struggle is likely to be a ray of light for Wii owners frustrated by the lack of ‘hardcore’ titles for the console, and with a little luck, might just convince other developers and publishers to take the Wii a little more seriously.