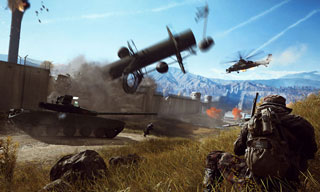 For a limited time, you can get every Battlefield 4 expansion for free on console and PC.

UPDATE: The deal has now been extended to the PC version of the Battlefield 4 expansions as well.

ORIGINAL STORY: Throughout the summer, EA ran the “Road to Battlefield 1” campaign, in which they gave away every bit of DLC from both Battlefield 4 and Battlefield: Hardline, Of course, each DLC was only available for a limited time, and if you missed out, you were simply out of luck. But if you missed out and you’re playing on console (PS3, PS4, Xbox 360, or Xbox One), you’ve got a second chance to grab the Battlefield 4 DLC, as it’s all free on console for a limited time.

Starting yesterday, you can download all the expansion for Battlefield 4 for free on console. The offer is only good for one week, and thus far it doesn’t include PC. The expansions included are:

Each of these expansions usually costs $15, so you can save a bundle if you grab this deal in time. You don’t need Xbox Live Gold or PS Plus to take advantage of this deal, but you will need a subscription to participate in online play, as usual.

The deal is a promo for Battlefield 1, which is set to launch on October 21 for PC, PS4, and Xbox One.