The demoer running games of Pendragon Game Studio’s 15 Men in the GenCon exhibit hall lured me over with the promise that it was a pirate-themed version of Bang!, the Origins Award-winning fast-paced social deduction card game where players try to shoot each other while figuring out who’s an outlaw and who’s on the side of the sheriff. He was underselling his own game. While 15 Men does share some mechanical and thematic similarities with Bang!, it adds layers of strategy and complexity that make it more satisfying and fun for everyone at the table.

15 Men was named for a lyric in the song “Dead Man’s Chest,” which was written by Robert Louis Stevenson as part of his novel Treasure Island. This game begins the same way as Bang!, with each player receiving a secret role card. It’s every pirate for themselves in a three-player game, but for larger games players are divided into teams based on whether they’re a mutineer or loyal to the ship’s captain. The captain reveals their card and gameplay starts with the player to their left.

The titular 15 men — each representing a historical or fictional pirate like Blackbeard or Treasure Island’s Captain John Flint — are cards placed face down around a circular board in the center of the table. The only thing you know for sure is the pirate’s nationality and general role, which can involve gathering information, shooting other pirates, or doing tricky things to manipulate the board. You also randomly pick what flag your ship is sailing under, which will give one player extra points at the end of the game if they have the most pirates of that nationality. 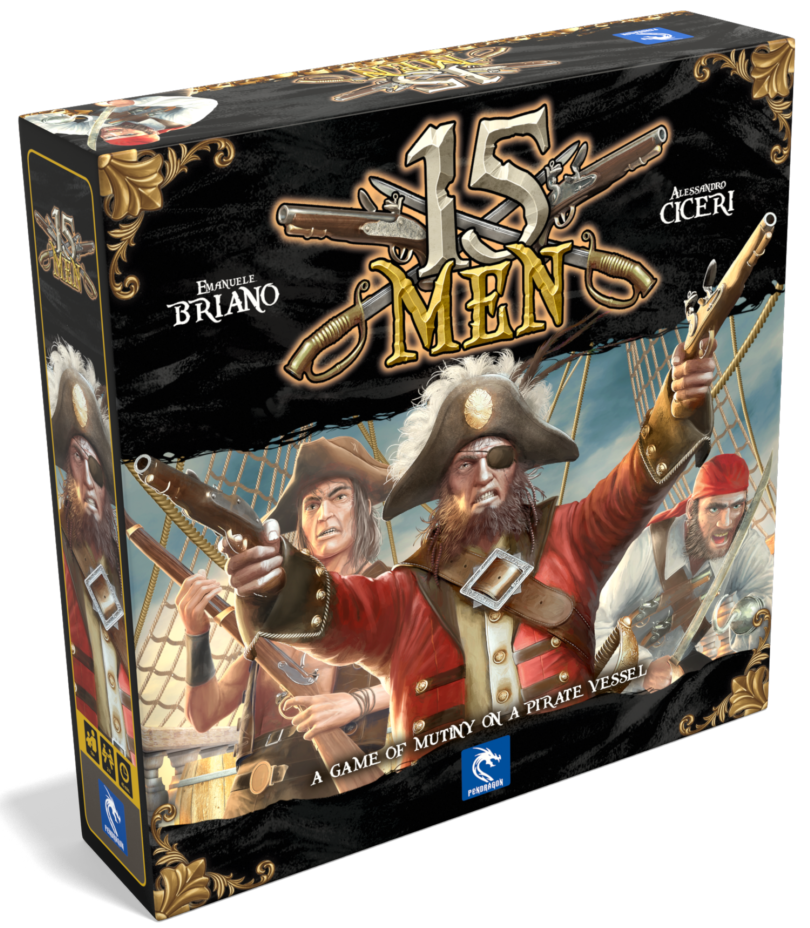 Players take turns bidding on pirates by placing colorful coins in front of their cards. Whenever you bid on a pirate, you get to peek at their card and at one of the adjacent cards. Knowing what’s in play is important to forming your own bidding strategies and interfering with other players. On my first turn I picked a card just based on his nationality because I wanted to get the extra points from the British ship, and I discovered he was a ghost and thus couldn’t be shot. This was particularly useful since the pirate to the right of him had a special ability indicating that, once all the bribing was over, he’d shoot the pirate to the left of him. The ghost pirate would also be more valuable if I found his living brother, so I started a series of smaller bids just for information-gathering purposes until I found him.

Other players favored a more aggressive approach. Placing the highest value three-point coin right off the bat means that you can’t be outbid, and the other players in my demo were quick to secure as many British pirates as they could. I was the captain, meaning I played last, but that was sort of an advantage as I could hold back my last three-point coin as a trump for when I found something I really wanted later in the game.

That’s especially relevant since some of the pirates have abilities that let the player with the current high bid on them flip them face up to change where coins are placed or move pirates around. That lets players grab pirates that were previously out of reach and mess with their opponents’ strategies. For instance, one player figured out I had the two brothers and managed to get rid of one of them to deprive me of points. Coins must be spent strategically to make sure you’re not overly reliant on one or two pirates who could be bribed away from you or killed.

Once all the coins have been placed, the shooting starts. Each player gets one bullet, which they can place on one of their pirates. At base, this allows them to shoot one of the adjacent cards and remove them from the game, but some pirates have special abilities letting them choose to shoot at greater distances or even to get free kills. Once all the bullets are spent, players add up the values of their surviving pirates and bonus points from things like the ship and whichever person or faction has the most wins.

Because of the finite resources and the different phases of the game, it’s hard for 15 Men to take more than 15 or 20 minutes, and no players can be eliminated before the game is over. That addresses two of the biggest weaknesses of Bang!, where a player can be shot to death early on and have to wait around while the other players get locked in a standoff based on how many offensive and defensive cards they’ve drawn from the deck. That speed seems like it would make it much easier to interest your friends in another round of bribery and betrayal.

15 Men will hit stores in October.