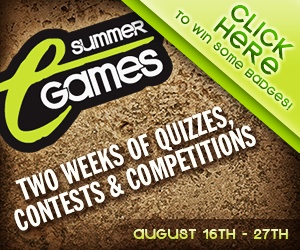 The 2010 Summer E Games has officially ended, and as part of our closing ceremonies we have full lists of the winners, as well as the results for the Legacy Battle.

From contests to flash games, members of The Escapist engaged in close competition for medals and bragging rights.

The Legacy Battle was beyond brutal this year, with some of the most beloved Legacies knocked out in the 3rd and 4th rounds. As the final round began, the number 1 seeded Half-Life was up against the epic saga of 10th seeded Star Wars. While Star Wars was in the lead going into the weekend, Half-Life fans put on the pressure and pushed Half-Life into its second time as Legacy Battle Champion.

Other Summer E-games competitions pitted The Escapist member versus member. Participants were could attain their own medals and medals for their country. After two weeks of head-to-head playoffs, we are pleased to announce the winning countries and participants.

Congratulations to the following countries who placed in the top 3!

With all of the competitions that took place over the two-week period of events, three Escapist members fought it out to grab the most individual medals. Congratulations to the final winners of the 2010 Summer E Games!

Congratulations again to everyone who competed in this year’s Summer E Games. For a full list of the individual winners or country breakdown, please head to the bottom of the main contest page by clicking here.