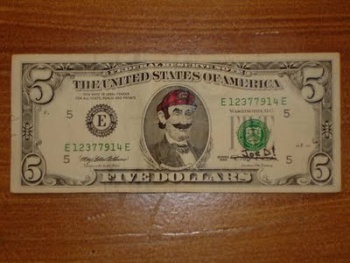 We here at The Escapist would never advocate the willful destruction of legal tender, but it doesn’t make these examples any less entertaining.

Now, just so you know, defacing legal US currency is actually a crime here in the States (and presumably in other countries as well), so it would be kind of off the mark for The Escapist to ever advocate doing this sort of thing. So here, just off the bat: You shouldn’t draw on your dollar bills, kids – it’s against the law (and knowing is half the battle)!

But, if you were ever in a hypothetical situation where you were to doodle on ol’ Honest Abe, you could do a whole lot worse than following the style of these 25 hilariously (nerdily) defaced bills. Abe Lincoln turns into Mario, or a Ninja Turtle, or a Power Ranger. George Washington might be the Joker (and Darth Vader, and Cobra Commander…) but he’s counteracted by Andrew Jackson’s Batman-slash-Spartan.

I might not ever do one of these doodles myself, but if I ever came across one of these as change, I think I’d probably just want to get it framed. Who could ever bring themselves to part with something like that?