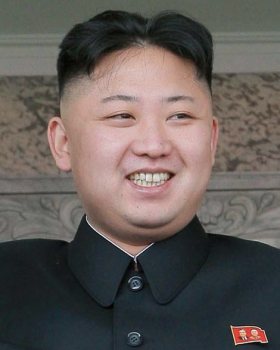 With a little help from his friends, North Korean dictator Kim Jong Un blew away the competition in Time Magazine’s 2012 “Person of the Year” Reader Poll.

Kim Jong Un is the third-generation ruler of the most repressive regime on Earth. He’s also the man at the top of this year’s Person of the Year Reader Poll, conducted by Time Magazine, more than doubling the votes received by the second-place finisher, Jon Stewart, and crushing such notables as Aung San Suu Kyi, Hillary Clinton, Mohamed Morsi, Psy, Barack Obama and even the Mars Rover. How did he do it?

As usual, the internet is to blame. “Jon Stewart, Undocumented Immigrants, Olympic gold medalist Gabby Douglas and Burmese leaders Aung San Suu Kyi and Thein Sein, Egyptian president Mohamed Morsi and New Jersey Governor Chris Christie all made it into the top ten,” the magazine wrote. “However, some of the highest vote tallies got a boost from members of Internet forums like 4chan who launched a campaign to manipulate the results, pushing North Korea’s supreme leader to the top of the list.”

Time deserves credit for not invalidating the results because of the obvious “cheating” or even wagging a finger at those responsible for them, suggesting that it’s come to terms with the fact that online polls like this are going to be messed with. And that’s not all the manipulating 4chan did: A few days prior to his victory, the group used a script to cast votes so that the first letter of each candidate’s name spelled out “KJUGASCHAMBERS.” The user who created the script told The Daily Dot that the phrase was chosen because it’s clever, referenced Hitler and “wasn’t as childish as our second choice of KFCBUTTSEX.”

And now, the top ten entries in Time’s 2012 “Person of the Year” Reader Poll!

Winning the Reader’s Poll does not necessarily make Kim Jong Un Time’s Person of the Year, however. That honor is chosen by Time’s editors and will be announced on December 19.