Diablo 3, on the surface, appears to be a game about slaying demons and saving the world from evil. But when you dig a little deeper, you’ll find it’s just a hell-themed slot machine, with each demon slain exploding into a rainbow of sweet, random loot. Most prized among this loot are legendary items, for quite a few have some very unique effects that can completely change the way you play the game. Here are some of the coolest ones 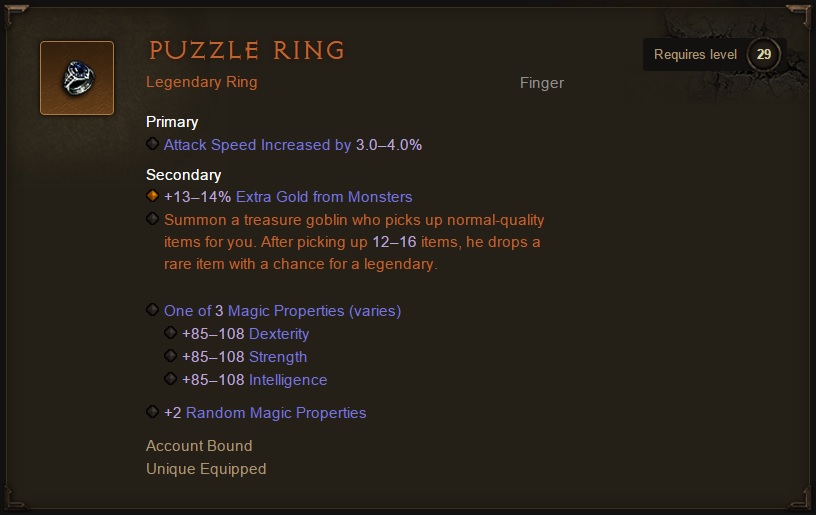 To be honest, the Puzzle Ring doesn’t really change your playstyle too much, but it is nonetheless a really cool item. It causes one of the game’s biggest loot Pinatas: the Treasure Goblin, to actually follow you around and pick up worthless white items, dropping goodies of his own after collecting enough of them. For an added bonus, throwing this bad boy into Kannai’s Cube opens up a portal to Greed’s Lair – the realm of the Treasure Goblins. 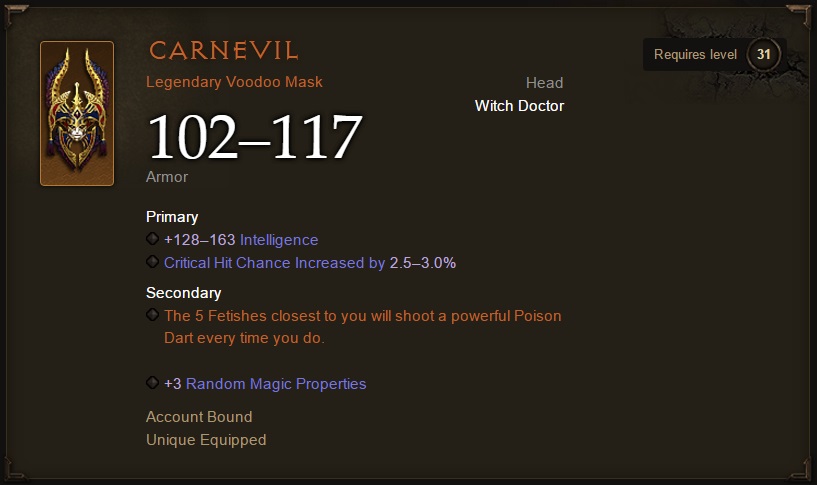 Carnevil is a Witcher Doctor item, which when combined with the Dagger of Darts turns Poison Dart – a usually low damage, fairly worthless spell, into your DPS powerhouse. It makes the fetishes nearest to you mimic your dart shots, and with the piercing effect from DoD means that your Witch Doctor and his fetish army will fill your screen with many deadly darts. 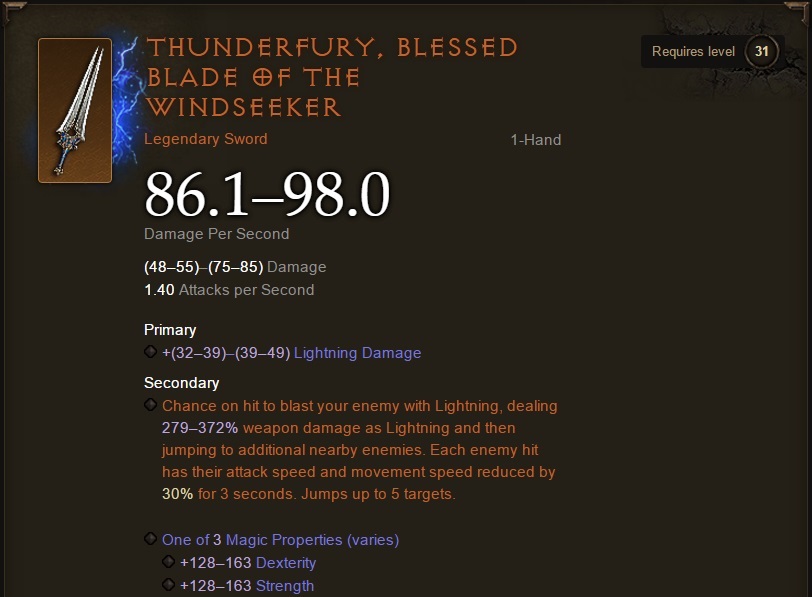 Thunderfury, Blessed Blade of the Windseeker was one of only two (at the time) legendary items in World of Warcraft. Acquiring one required the co-operation of an entire guild, and a lengthy, difficult quest line. It was truely one of the most “legendary” items in the game, so seeing it immortalized in Diablo 3 is quite fitting. It has pretty much the same effect in D3 as it had in WoW – sending a chain of lighting to your closest enemies for damage and a debuff. 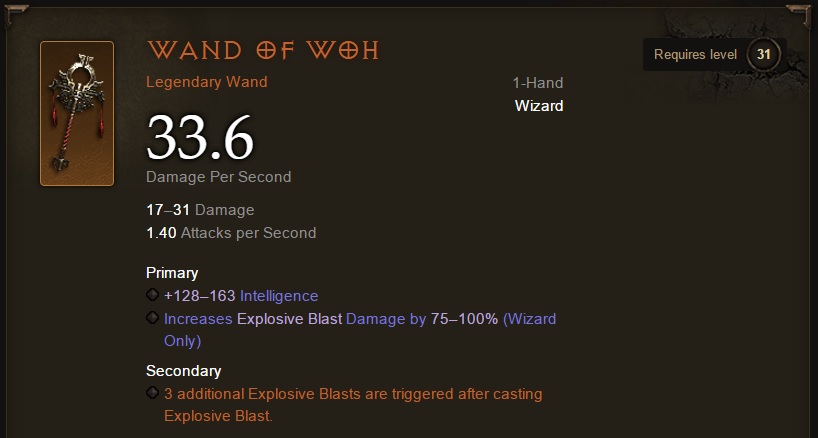 Here’s another major build changer, this time for the Wizard. The Wand of Woh makes your explosive blast detonate an extra three times, and is used to create the “critical mass” Wizard build, who simply walks through enemies while constantly exploding.

Legendary potions are a cool little twist on a Diablo standard – giving your normally static potion an extra “power”. Sure, there are legendary potions that are more useful (like the tower potion) but Kulle-aid is easily the “Kulle-est”, letting you smash through walls like the Kool-aid man. 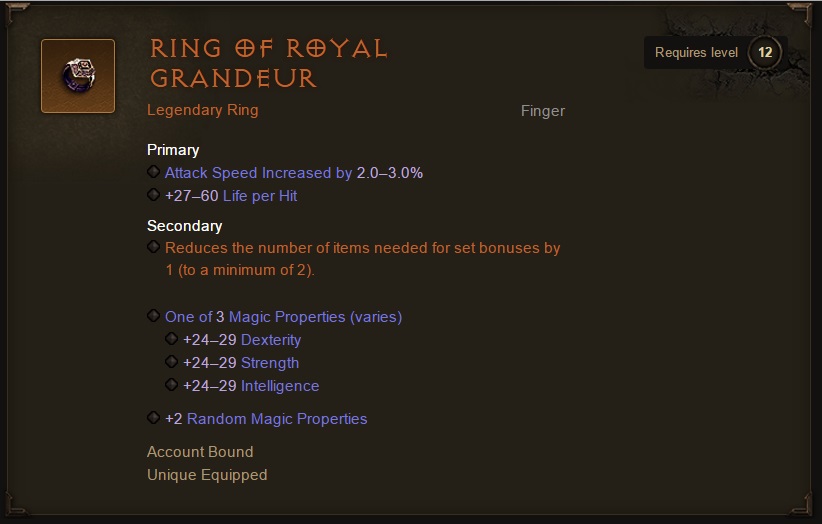 No item in Diablo 3 is more sought-after than the Ring of Royal Grandeur. While on paper it doesn’t seem too interesting, the combos it lets you pull off by only having to have 5 pieces of a 6-piece set equipped is unmatched by any other item in the game. When it first came around, it was pretty much an instant-equip on almost all classes and builds, and now that Kannai’s cube has come around, it’s one of the most popular choices for the jewelry slot.

Kridershot is one of the most valuable Demon Hunter items because it has the power to completely change your playstyle. Elemental arrow, ordinarily a Hatred spender, is now a hatred generator, which effectively means that you no longer have to rely on a weak hatred-generating attack for your build. 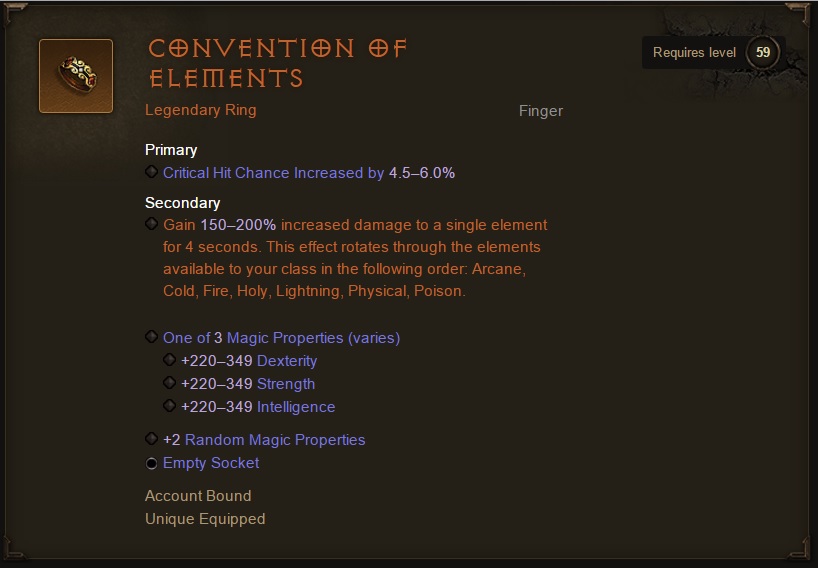 Lastly, we come to Convention of Elements. What’s especially cool about Convention of Elements is that it was the legendary item designed by players at Blizzard’s “design a legendary” competition last BlizzCon. Despite this (or perhaps, because of this) it has one of the most unique designs in the game, and promotes several different playstyles. Do you want to make a build that tries to “nuke” a single element of damage whenever the bonus ticks over (like a Jade Harvester Witch Doctor) or perhaps a build with multiple different elements of damage to make better use of the buff?

What do you guys think? Are these truly the coolest legendaries, or are there some other ones you think are cooler? Let us know in the comments!