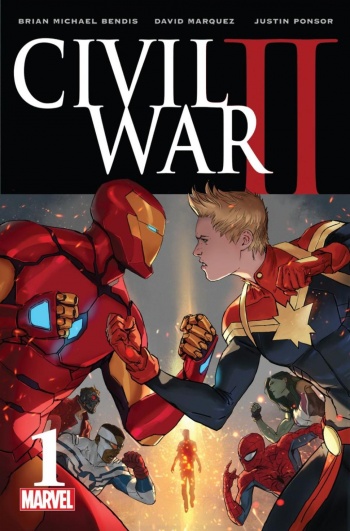 It’s just a few more months before Marvel fans can watch superheroes beat each other senseless in Captain America: Civil War. But comic book readers won’t be left out – Marvel Comics will soon roll out Civil War II, a sequel to the original 2006 event. What will pit one-time friends against each other this time? As it turns out, something fairly personal: The death of a major Marvel character.

The original Civil War event was based around the Superhuman Registration Act, which forced all heroes to either reveal their secret identities or be arrested for illegal vigilantism. Civil War II is taking a different approach, one that veers into Minority Report territory. It begins when a powerful precog character emerges who can predict the future with a startling degree of accuracy. This information ultimately divides Marvel’s heroes: Captain Marvel wants to profile potential criminals in advance, while Iron Man fears this will lead to people being persecuted for actions they never committed.

So where does this “major Marvel character” come in? Apparently this new seer predicts that a hero will be responsible for a devastating act of destruction three days in the future. While the actual character and their motives aren’t yet known, it will force Marvel’s heroes to make a hard choice – presumably with lethal results.

Sure, Civil War II is an easy way to get Captain America: Civil War viewers looking at comics while marketing Captain Marvel at the same time. And resurrecting the Civil War name does feel strange with the Secret Wars tie-in occurring so recently. But all the same, the premise is a great way to put superhero characters on the defensive incredibly quickly. If writer Brian Michael Bendis and artist David Marquez can take the concept in a unique direction, this should make for a very interesting read.