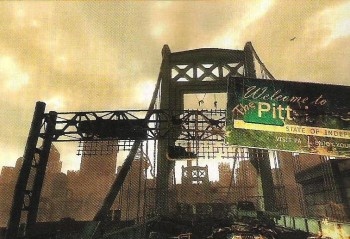 A few early details about The Pitt, the second piece of Bethesda’s DLC triumvirate for Fallout 3, have been revealed in the latest issue of Official Xbox Magazine.

The Pitt will include a large “dungeon,” an abandoned steel yard and a settlement divided into two halves, one occupied by slaves and the other by their masters. Raiders will feature prominently and players in The Pitt will be able to actually interact with them as opposed to just shooting them in the face. The magazine describes the new setting as a “stunning dystopia that’s unlike any other area in Fallout 3’s world.”

Numerous side quests and unique items will be available in the expansion, including the “Auto Axe,” which CVG says is “a bit like a chainsaw crossed with a Black & Decker hedge trimmer.” One major quest will have the player pretending to be a slave while he investigates a rumor that the Raider boss has found a cure for mutation. The magazine also claims that gamers who were disappointed with Operation: Anchorage will find much greater satisfation in The Pitt, saying, “This is Fallout 3 as you know and love it.”

Sadly for fans champing at the bit, the release of new details isn’t going to hasten the release of the actual expansion: The Pitt still won’t be out until March.