Welcome to Sword Art Online II: the show where everyone loves Kirito and nothing matters.

Sword Art Online hit massive popularity two years ago when the first season of the anime adaptation released. Starting out in an online world where the characters are trapped and will die in the real world when they die in the game, Sword Art Online looked like it could effectively examine our relationships with others in games and what would happen in dire consequences. The idea wasn’t new – several other anime have covered the horrifying circumstances of being stuck inside a game – but it was at least an entertaining ride for the most part. The second season introduces one new game and revisits the game Kirito plays in the second half of the first season. Unfortunately, the show gives few reasons to actually care.

The second season begins with a new virtual reality MMORPG called Gun Gale Online. Rumors are circulating about a person named Death Gun who can fire a bullet in the game that will also kill people in real life. Kirito, the protagonist of the last season, starts working with the Ministry of Internal Affairs to investigate whether such a thing is possible. This arc starts off as a mystery, but it suffers from pacing problems that make it hard to keep an invested interest. The deuteragonist, Sinon, is an avid Gun Gale Online player. She’s a well-known sniper in the game, and she even plans on competing in a competition with the silliest name imaginable (Bullet of Bullets). Kirito and Sinon end up working together as Sinon helps Kirito find Death Gun, and Kirito helps Sinon through her fears.

When Sinon was a young girl, a man barged into the post office and aimed a gun at her mother. Sinon managed to take the gun from him and shot him. Because of this event, Sinon is terrified of guns and is playing Gun Gale Online as immersion therapy to conquer her fears. Sinon’s stress triggers whenever she comes into close contact with guns or realistic replicas. At first, this seems like a well done representation of a trigger – Sinon panics when she tries to hold the gun replica she keeps in her desk at home. Her breathing becomes labored and she can only remember how terrified she felt the time she held a gun and killed someone. It’s surprisingly dark for Sword Art Online, and the show would have pulled it off had it not done it in such an overdramatic manner. The over the top, highly saturated red in the background and an unreasonable amount of blood flowing across the floor distract from the terror Sinon feels.

Sinon is still a breath of fresh air in a show like Sword Art Online, which feels like it honestly could have ended after its first arc, halfway through the first season. In fact, this season repeatedly reminds viewers of the Sword Art Online arc as if it’s saying, “Remember the Sword Art Online you enjoyed? We’re going to keep reminding you what happened.” The main problem with Sword Art Online is that it has no concept of subtlety. Everything must be explicit, and it becomes obvious when Sword Art Online wants to get a specific emotional reaction out of you. This ends up ruining the mystery plot of the Gun Gale Online arc. Kirito realizes the person behind Death Gun was a member of the player-killing guild of Sword Art Online and that this was someone he had fought against after killing a handful of that guild’s members. Kirito is racked with guilt as he’s unable to remember the names of the people he killed. Because the arc goes on longer than it should, some sequences get drawn out so that we can see flashbacks multiple times (as a constant “Hey, remember this?”). 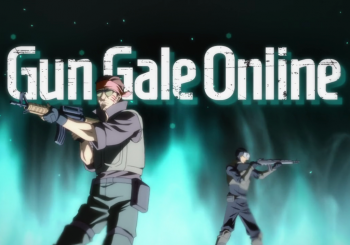 Kirito and Sinon are both trying to accept and let go the terror they’ve experienced killing people in self-defense. The two, while they don’t get along for a while, open up to each other and find support. This kind of emotional connection is at the heart of Sword Art Online. As annoying as it is to see Kirito get along with literally everyone who’s codified “good guy,” every arc has shown people understanding each other better through a shared online experience. That’s still present in the second arc, and it’s the best part of the show.

The Gun Gale Online arc falls to pieces near its conclusion as everything wraps up in the mystery. Sword Art Online is disgusting in how it treats women experiencing sexual assault: at the end of the first season, the antagonist who’s imprisoned Asuna in Alfheim Online places her in chains and attempts to molest her in front of Kirito. The sequence was framed to give viewers more reasons to hate the antagonist and to root for Kirito’s vengeance. In this season, Sinon wakes up in her room after finishing the competition with Kirito. One of Sinon’s friends stops by to congratulate her, and it’s revealed he was Death Gun the whole time. The show immediately flashbacks to a few throwaway pieces of dialogue he had as a way to pull a poor “gotcha!” on the audience. Now, the person Sinon thought was a friend announces he’s going to poison her. He repeats her name over and over and starts touching her without her consent. She shuts down out of fear. This is something that actually happens to rape victims, but Sword Art Online lacks all class to cover it respectfully. Sinon’s aggressor foams at the mouth like an animal with rabies. She’s damseled to make us hate the person we just found out is the antagonist and to make Kirito a hero when he bursts into her house and punches the crap out of the guy. I’m not joking when I say that this episode was the worst episode of a show I have ever seen – and I’ve seen some shitty anime.

The following arc is a short one boasting some good animation for fights, which it needed because that’s basically all this arc is about. Kirito and the gang, now including Sinon, must take down a boss and retrieve Excalibur. And since this is Sword Art Online, Kirito is obviously the only person who can have the legendary Excalibur. This arc also wouldn’t be without some jokes about Sinon liking Kirito – because everyone loves Kirito. 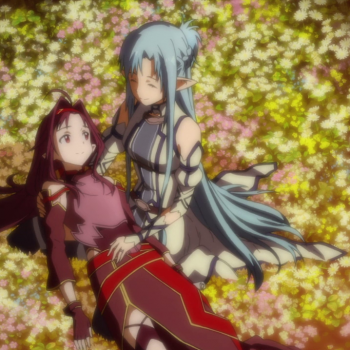 As much as it sounds like I hated this season, the last arc, Mother’s Rosario, saved it for me. Asuna becomes the main character while Kirito stays in the background, only to pop in occasionally as a deus ex machina. Asuna hears about an Alfheim Online player named Zekken who hasn’t lost a single duel. And because she beat Kirito, we know she’s got to be serious. Asuna becomes the closest to standing toe-to-toe with Zekken, whose real name is actually Yuuki. The two become good friends as they fight the next floor’s boss with Yuuki’s guildmates. This arc feels like a nearly clean slate for Sword Art Online; most of the characters are new, and this is all about Asuna’s relationship with online games and how that conflicts with the responsibilities her mother believes are a higher priority. This arc isn’t long, and it’s the perfect length for a side story that hammers home Sword Art Online‘s main point: relationships made in the virtual world are just as impactful as ones made in the physical world.

It’s also a beautiful story about friendship between two women. I never expected to see that story in Sword Art Online considering it’s felt like a harem show where Kirito saves the day every time and gets all the girls. Asuna has genuine character development as we learn more about her family, and we get to see her take charge of a group in tactics just like she did in the Sword Art Online arc. Asuna hadn’t been given the time to shine since then, and I welcome her brief period as the main protagonist.

The Mother’s Rosario arc has some clichéd emotional moments, but overall it’s touching to see a bond so strong forged over just a few days. It wraps up with a sudden a teaser that the antagonist from the first arc – remember how much you liked that arc? – could still be making waves in the virtual reality technology world.

I honestly wouldn’t be surprised if there’s a third season of Sword Art Online, but you won’t catch me watching it for pleasure.

Bottom line: Sword Art Online II is bland and predictable. The show doesn’t start to shine until Kirito is pushed to the sidelines to make room for people who have character development underway.

Recommendation: If you’re a hardcore Sword Art Online fan, I can’t stop you from watching this. Otherwise, the final arc of Sword Art Online II was the only part of this season worth watching.

Resident Evil Zero May be Getting a HD Remaster