I knew going into the inaugural Penny Arcade Expo East that I’d be spending a lot of time walking my proverbial beat, so I figured there was no better venue for me to get some mileage out of the Pokéwalker peripheral. Why put those steps to waste when I could be leveling my Pokémon at the same time? What I didn’t anticipate was how the little device would shape a budding miniature community on the PAX show floor.

Up until now, the main function of the Pokéwalker that I’ve used is its leveling-up mechanic (and how to cheat it): every step you take earns your Pokémon a bit of experience. But Nintendo had a stroke of genius when designing the thing – not only can your Pokéwalker connect with your DS to transfer your monsters back and forth, but it can connect with other Pokéwalkers as well.

Two people meet, put their Pokéwalkers together, and, at the press of a button, their respective critters are on a playdate – and both trainers receive items as “gifts.” You can only connect with any individual trainer once every eight or so hours, but as long as you’re interacting with different people, there’s absolutely no limit on how often your Pokémon can make new friends or gifts you can receive.

I’d already known about this function thanks to Escapist IT mastermind, Virgil, but when I strapped my Pokéwalker to my belt and set out to PAX, I had no idea how popular it would become. My first playdate happened while waiting in line for the keynote speech – the person standing behind me was playing Pokémon SoulSilver and had his Pokéwalker strapped to his hat. “Why not,” I thought to myself, and held my own device up – “Pokémon playdate?” He agreed, we connected, and went on.

Later, while I was in the Press room, my Pokéwalker was sitting out on the table as I furiously wrote up Wil Wheaton’s keynote speech (to be honest, I’d forgotten I’d put it there). Another member of the media walked past on his way to sit down and write, but when he caught sight of the device in its snazzy black-and-gold carrying case, he paused, and reached for his own. “Pokéwalker?” he asked.

“Pokéwalker,” I agreed, picking mine up and hitting the Connect button. 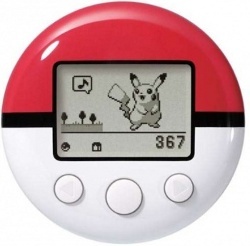 Those two meetings set the stage for the entire weekend. As the convention went on, I found myself not just scanning the show floor for interesting-looking games, but scanning my fellow attendees looking for that little red-and-white disc on their belt, on their hat, or clipped to their shirt. The moment I found one, all I had to do was call out “Pokéwalker!” and catch their attention before our companions could go have adventures or play-wrestle or whatever else Pokémon actually do on their playdates.

But while Nintendo makes this connection desirable by adding gifts as rewards, I realized that I didn’t even care about those items. I was searching for other people with Pokéwalkers because I knew that they were like me – they were people who cared enough about the game and their little pocket monsters to spend the time and effort to carry the creatures around wherever they went. The Pokéball clipped to our clothing wasn’t just a clever Nintendo peripheral, it was a membership badge.

Sometimes, it was connect-and-go. We’d walk up, we’d Pokéwalk, and we’d move on. Other times, we’d just share a few words about whichever Pokémon we were carrying with us: “Oh man, you have a Ralts? What, did you transfer it over from Diamond?” “Hey, where’d you get that Dratini?” “Hey nice, a Jirachi!” “Ooh, Tyranitar.” And on occasion, those little exchanges would evolve into full-blown conversations about the composition of our ideal teams, how far we were in the game, and how much of a bitch Jasmine’s Gym was without a good Fire-type to handle her Steelix.

Wearing the Pokéwalker instantly identified you as a member of a real-world community to anyone else who was looking, and when someone approached you with their device, you immediately knew that you had something in common. It was the same feeling I got whenever I ran into someone wearing an Alliance t-shirt – our eyes would meet, and we’d share a nod of camaraderie and fellowship: F*ck the Horde.

(Actually, given that I nicknamed my Dratini after a Warcraft dragon, the Pokéwalker did end up identifying me to Pokémon fans and WoW fans alike, but I digress.)

It was surprising how a little bit of plastic could foster such a sense of community – the sense that no matter where you went, as long as you could Pokéwalk, you were among friends. Nintendo created a physical Pokémon community out of people who might not have otherwise known how many other fans there were around them.

And for what it’s worth, I got a ton of rare items out of the trading. So that was awesome, too. Everybody wins!

John Funk got, like, ten Ultra Balls from a weekend of Pokéwalking.

Rumor: Call of Duty 7 Is “Black Ops,” Has Dedicated Servers