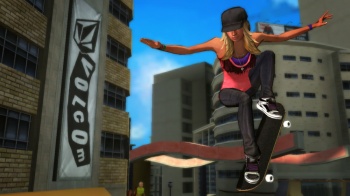 The Tony Hawk series isn’t what it used to be. Once upon a time, the series was a major earner for Activision, but the most recent release – Tony Hawk Shred – limped out of the gate, selling just 3,000 units in the US at the end of October. But Activision Publishing CEO Eric Hirshberg says that people shouldn’t count the series out just yet.

Hirshberg said that the 3,000 unit sales for Shred, which is the second game to use the skateboard controller than debuted in Tony Hawk Ride, only represented two days worth of sales. He thought that sales would spike over the holidays, as parents bought the game for their kids as a gift, and said that Activision would continue to advertise the game all through the holiday period. Hirshberg did admit, however that Activision did have to ask itself some questions about the direction of the series, and made it clear that Activision wasn’t ignoring the fact that it had lost some of its audience.

One thing that Hirshberg was confident was not keeping people away was Hawk himself. Hirchberg thought that Hawk had the same kind of long-lasting appeal as basketball player Michael Jordan, and that while there were younger and more current skaters; Hawk was an icon in the sport. “Tony Hawk does really still have relevance and tremendous appeal for people,” he said. “He really is that kind of Mount Rushmore-level guy in that category.”

It will be interesting to see if Shred really does do better over the holidays. It wouldn’t be the first time that an Activision game with a non-standard controller has been a slow-burner: The first DJ Hero didn’t sell spectacularly well in the first month, but went on to sell around two million units. That said, Hirshberg’s claim that the Tony Hawk name is still a big draw is a little hard to believe, as 3,000 units is low, even for a slow burner.