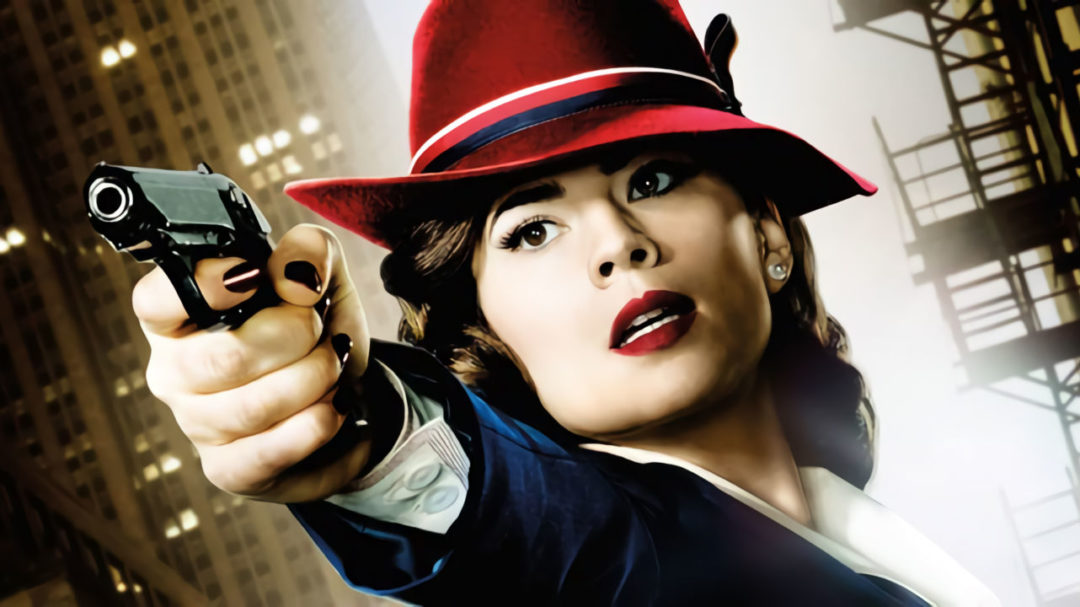 This article contains spoilers for Avengers: Endgame. A previous version appeared on Flixist.

Specifics on the post-Avengers: Endgame Marvel Cinematic Universe plans are a bit hazy, but Marvel Studios is planning to get a lot of mileage from some of their older characters. Enter Disney+, the streaming service which will host already announced spinoff shows like The Falcon and the Winter Soldier. Marvel Television already has a history of giving MCU characters without starring vehicles a shot at the limelight and Agent Carter, led by Hayley Atwell, was the best of them. It’s time to toss Peggy Carter back in the ring and honor the show that made these other projects viable in the first place.

Agents of S.H.I.E.L.D. was the first television spin-off of its kind — and not only had some fun Agent Carter tie-ins in its second season but also remains a damn good show on its own — but Agent Carter was the first to focus on one single character. Part of the reason it was so damn good was that the right people were involved in producing it at ABC.

Marvel Studios, the studio behind the theatrical films and the upcoming Disney+ shows, has always been separate from Marvel Television, the branch that produces Agents of S.H.I.E.L.D. and the other shows on Netflix, Hulu, Freeform, and ABC. Agent Carter, however, was unique as a collaboration between the two with Marvel Studios figureheads Kevin Feige and Louis D’Esposito involved in its production.

This goes back to the Marvel One-Shot short film also named Agent Carter, which came with the Iron Man 3 home release. That short was directed by D’Esposito and written by Eric Pearson, who went on to write several episodes for the show and co-wrote Thor: Ragnarok. It served as a proof of concept: Hayley Atwell’s Margaret “Peggy” Carter, in a post-WW2 world, navigates through a sexist workplace at the Strategic Science Reserve (the precursor to S.H.I.E.L.D.) while moonlighting as an agent and doing the hard work singlehandedly. Feige, D’Esposito (who directed the pilot), and Pearson carried that premise over to the show which was in turn back by creators Christopher Markus and Stephen McFeely. That pair not only wrote the three Captain America films, but Avengers: Infinity War and Endgame as well.

This powerful team of MCU creators clearly still loves Peggy Carter, and are heavily invested in this small corner of the MCU that they created. Just look at the most essential cameo in Avengers: Endgame. (If you are somehow part of the small portion of humanity that didn’t contribute to the $1 billion-plus weekend gross, minor spoilers are ahead.

Not only does Peggy Carter make an appearance during the film’s time traveling hijinx, but Markus and McFeely made MCU history by inserting the first instance of a character introduced on a Marvel Television show into a Marvel Studios film. Not Quake from S.H.I.E.L.D., not Daredevil or any of those Netflix schmucks, and certainly not any of the Inhumans — but Edwin Jarvis, as played by James D’Arcy from the television show. While he only had a grand total of one line of dialogue in Endgame, I squealed in the theater when he popped up to pick up Howard Stark. And to me, that squeal was well-earned after two seasons of excellent television.

Jarvis, the namesake of Tony Stark’s Paul Bettany-voiced AI, was just a part of one of my favorite portions of the overall MCU. Edwin Jarvis, Dottie Underwood, Daniel Sousa — all were wonderful contributions to the MCU. Then there’s Peggy Carter herself. Well before Captain Marvel took credit for having the first MCU female lead; before that was Ant-Man and the Wasp gave a woman a title role; before even Jessica Jones snarled her way onto Netflix there was Agent Carter. Continuing the short film’s depiction of a sexist work environment, Peggy Carter, unfortunately, had to put in more work to prove herself to her male colleagues, which made for powerful, charismatic sequences.

Here’s a brief clip from one of my favorites in episode 2, “Bridge and Tunnel,” which was directed by Captain America and Avengers co-director Joe Russo:

This sequence is wonderful for a multitude of reasons. Carter demonstrates her physical combat abilities, which we don’t see enough of in the films. By extension it shows off the show’s creative fight choreography, with this specific one having the Captain America radio show playing in the background and the foley work from that radio show juxtaposed with the action from Peggy through precise editing. And from a thematic perspective, it’s also another way to visualize Peggy’s pushback against the sexism of the era, as she more than holds her own in contrast to the radio show depicting Captain America saving a cliched damsel-in-distress.

I could go on and on just posting random cool clips from the show. In fact, here’s another one from the season one finale, this time featuring Jarvis:

There are plenty of scenarios where Peggy Carter has to use brains more than brawn, often going into spy mode and utilizing disguises and accents to her advantage.

Agent Carter, bolstered by the long form format of television, also got to really explore the lead’s rival. Dottie Underwood (Bridget Regan) is the other side of Peggy’s coin and it’s magical witnessing their foil and the dynamic. On the world-building side of things, she’s part of a program that serves as a precursor to the Black Widow Red Room program seen in Avengers: Age of Ultron flashbacks. But as a character, she serves as an example of what someone with Peggy Carter’s talents and skills could have ended up under a different allegiance.

Watching their high stakes cat-and-mouse spy war was always a highlight of the show. And even outside of combat, the pure tension between the two is magnificent and unique as its the first MCU property with both a female protagonist and an opposing female antagonist.

But the good guys are just as good as the bad ones, Edwin Jarvis especially. You’ll see him more in the field than Batman’s Alfred, and while he may initially come across as a bumbling, inexperienced comedic sidekick, he eventually proves his worth. One of my favorite scenes, not just with Jarvis, not just of the entire show, but from any of the MCU shows, is a light scene with Peggy and Jarvis sparring.

Again, we have a moment that does more than one thing. This scene captures the “old-world” quality of the period; reveals that Jarvis has trained more after the adventures of season one while showing a new and different side of the character; gives Peggy a beautiful comic beat Peggy while also cementing her friendship with Jarvis by introducing her to his wife. It’s also a good example of the softer cinematography meant to invoke the period, as opposed to the harder and grittier look of Daredevil and late-era S.H.I.E.L.D. I hesitate to show any more material from season two, but Jarvis is given some more dramatic heft later on.

To be honest, I care very little about the other male characters in Agent Carter. The presence of Daniel Sousa (Enver Gjokaj) is welcome for representing a disabled character still very much active in his regular work, but he’s not the most dynamic character. Jack Thompson (Chad Michael Murray) is a character about as boring as his name. And while Dominic Cooper’s Howard Stark is great, we’ve seen the guy before.

Agent Carter was not a perfect show; in fact, I thought season two, with its extended episode count compared to the first season, flailed into an anti-climax in the last episode. Plus, that season’s love triangle was a bore. But for everything the show did for the larger MCU, for all of the investment that some of the larger Marvel Studios players put into it, it deserved more than the most gaping cliffhanger I may have seen on television in my lifetime.

Jack Thompson got shot by an unknown assailant! Peggy’s K.I.A. brother was hinted to still be alive! And who is Peggy’s mysterious husband referenced in Captain America: The Winter Soldier? Sousa, perhaps? Because of ratings and the ABC network, we never found out any of the above.

Feige, D’Esposito, Markus & McFeely, the Russo brothers — who have their own darn production company after their Marvel success — and Disney have the power to continue that story. With other film supporting characters getting their due, there isn’t a better window of opportunity for an Agent Carter revival. Peggy Carter is the original MCU leading heroine.

Given the ending of Endgame, in which (major spoiler) Steve Rogers goes back in time and spends his life with Peggy Carter in an alternate timeline, that timeline might be interesting fodder for a season three of the show. These split timelines will almost certainly be the focus of the Loki Disney+ show, and if finding out who the hell shot Jack Thompson isn’t an interesting enough plot, maybe we could find out what happened when Steve Rogers stole Peggy’s heart from her canonical husband, who many presume is Sousa from the show.

It’s still a pipe dream, and while all of the pieces are there, they’d have to move in the right direction at the right time for an Agent Carter season three. But even if this were to never materialize, at least we can thank Agent Carter for bringing us the first and probably only musical dance number in the Marvel Cinematic Universe.

Chris Compendio
Chris is a staff writer at Flixist, with bylines in Destructoid, Paste Magazine, DualShockers, and their own AP Marvel publication and podcast show. A screenwriter and MCU enthusiast, they are pretty sure that Captain America: The Winter Soldier is the best movie ever.

Sonic The Hedgehog Shouldn’t Be Redesigned