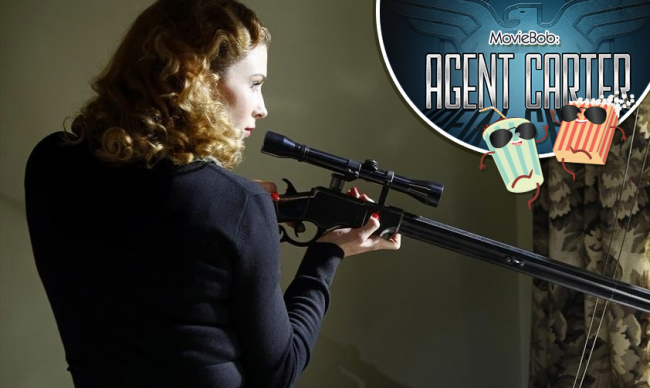 With the finale in sight, Agent Carter continues to ramp up the action while also hitting some heavy plot points.

Two episodes out from the finale, it appears Agent Carter is looking to sprint to the finish, dropping another action-heavy episode that goes hard on plot-turns and revelations while paying off earlier setups.

In the previous installment, Peggy Carter had finally won the respect (or some of it) of her SSR colleagues for the ass-kicking she delivered to Soviet agents during a raid on Leviathan’s “Black Widow” training camp. As “A Sin To Err” opens, we find that said respect has endured enough that Chief Dooley (Shea Wigham) is willing to let her chase down her new pet theory: That the killer moppets trained at the BW facility years ago may have grown up into the exact sort of seductress spies that could’ve manipulated their way into Howard Stark’s good graces – and his vault. But by the end, all that respect has come crashing down as the SSR finally susses out her double-agent dealings.

Oh, and that Russian psychiatrist liberated from the camp? He’s a bad guy, and he wanted to get caught – turns out he’s with Leviathan… and a master-hypnotist looking to ply his trade for access to that cache of reclaimed Stark weapons. More to say about him in a bit.

After some digressions into more straightforward spy genre skullduggery, this was a welcome return to (and deep-dive into) the series’ main thematic focus on the “invisible world” of American women in the post-war/pre-feminist era. The early episodes focused on how Peggy was able to use the otherwise frustrating aspects of her world (male colleagues who barely acknowledged her, enemies who misjudged her, institutions like The Griffith Hotel that actively rendered women invisible in order to police their sexuality) to her advantage in spycraft; and now we get to see Dottie (or whatever Black Widow Mark-I’s real name is) put her evil-doppleganger spin on the same routine, setting up a sniper’s nest by overtaking the office of a sleazeball dentist who’d sent his staff home so that he can sexually-assault female job applicants.

Even still, things wind up in a pretty dark and ironic place: “Saved” from being killed by Dottie when the SSR finally manages to arrest her (I do wish we got to see more of the Keystone Cops antics of these hard-headed dopes charging around trying to solve things) thus placing her in the second worst possible scenario she could find herself: Stuck with colleagues who not only don’t trust her, but are no longer going to let their guards down for any “Just a girl” trickery. Meanwhile, Dottie and the Evil Doctor are at large with a map to Stark’s crates of superweaponry.

Naturally, this has to come to some level of a happy ending – we already know that Peggy Carter survives into the present and will in fact be helping to found S.H.I.E.L.D a few years from when this is all taking place. But Agent Carter has wrung a lot of tension from its scenario, and I can’t wait to see how it wraps up.

Kicking myself for not even guessing at it earlier, but the Leviathan psychiatrist/hypnotist is pretty obviously either a pseudonym or a student of perennial Captain America nemesis Johann Fennhoff, aka “Doctor Faustus,” whose stock in trade was indeed hypnotizing victims into committing crimes or giving up information before nudging them into suicide.

Searching for Black Widow handcuff scars was sort of a thin line on which to hang the montage of looking up Stark’s recent ex-girlfriends, but it’s a good scene all the same. The Marvel Cinematic Universe has minded both the elder and junior Stark’s womanizing for comedy and cool-indicators for almost eight solid years since the original Iron Man, so it feels long overdue to finally point out how sleazy and unkind it looks from the other side.

Peggy getting set to be interrogated by both of her would-be suitors – Thompson (the sexist jerk who at least respected her enough to be honest about it) and Sousa (the nice guy who’s maybe not as noble as he thinks he is) – is a little contrived, but it should be interesting as (presumably) a breather before the finale.

Still not sure how this is going to wrap up, but I’m still holding to my pet theory that Sousa is en-route to going bad, possibly relating to that precious vial of Captain America’s blood.

Hitman: Agent 47 Trailer: Bring Me My Gun So I May Kill You With It