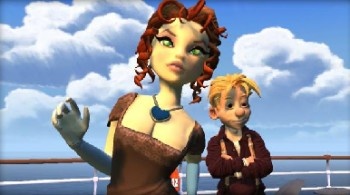 Leisure Suit Larry: Box Office Bust was released at the end of March, published by Codemasters after Activision dropped it following the merger with Sierra parent Vivendi Universal. The game has been savaged by critics, with GameSpot calling it mindless, repetitive and atrocious while IGN said, “Under no circumstances should [Leisure Suit Larry: Box Office Bust] be purchased by anyone.” The game currently has a Metacritic score of 25.

The critical thumping seems to have sparked a certain degree of schadenfreude in Lowe, who sounded just a little bit more gleeful than necessary in comments he posted on his blog. “VU (and later Activision, Team 17 and Codemasters) did not consult me nor discuss anything about this game with me. In fact, they’ve expressed no interest in me whatsoever!” Lowe wrote. “For a while, I hoped that they would remember to send me a review copy. Now that the reviews are in, it’s just as well that they didn’t!”

It’s hard to tell if Lowe is bitter about not being included in the rebirth of the franchise or genuinely happy that it’s faring so poorly without him. In either case, he’s not shy about speaking his mind. After linking to very poor reviews from GameSpot, EuroGamer, TeamXbox, CheatCodeCentral and IGN, Lowe said, “Thank you, VU Games, for keeping me completely away from this latest disaster!”