I was pleasantly thrilled to see people respond so enthusiastically to this week’s Big Picture feature, Night of The Lepus – surely the Citizen Kane of giant killer rabbit movies. So I figured it might be a fun diversion to offer you a glimpse at a few more movies that tried to make monsters out of less-than-fearsome animals.

This is probably the most infamous feature on the list, a 1950s drive-in classic made infamous as a public-domain mainstay and by a feature showing on Mystery Science Theater 3000.

As pitches go, “giant shrews” isn’t quite so awful – shrews are vicious critters for their size, and their ravenous dietary needs makes the idea of enlarged ones suitably unnerving. But the execution, with non-actors barely hitting their marks and the title monsters played by dogs with bath mats draped over their backs, renders it a walking (skittering?) joke.

Incredibly (or maybe not, in this day and age) a fifty years later sequel – featuring original star James Best, no less! – actually went into a production over a year ago. It has yet to be released.

Another MST3K alumnus, Squirm is probably the best movie on this particular list – a decent attempt at an icky gore flick in which downed power lines (somehow) drive common earthworms into frenzy for (live) human flesh. That some of the worm-ridden victims end up something like half-zombies is a novel touch, but for the most part the reason folks still talk about this one is that Special FX legend Rick Baker did some of his early work here.

For what it’s worth, the oddly long-careered yet infrequently-credited director Jeff Lieberman actually made a genuinely nifty movie three decades later called Satan’s Little Helper, about a disturbed young boy tagging along with a serial killer whom he’s mistaken for the demonic main character of his favorite videogame.

A perennial entry on the “should’ve spent more on the monster” list, the monster here is a pollution-mutated mama bear, which actually sounds suitably scary until you actually see the rubber-suited embarassment they used to simulate it. Incredibly, John Frankenheimer – late of the original Manchurian Candidate – was in charge of this.

Otherwise, the movie isn’t bad, though its boilerplate 70s eco-horror plot (EPA investigators discovering mutants caused by logging industry malfeasance, a Native American tribe that believes the mutant is an incarnation of a vengeful Forest Spirit, the whole deal) is embarrassingly dated. It’s also a strange hybrid of pre and post slasher-era horror movies, with proactive professionals making up one half of the victim pool while hapless campers wander in to provide more cannon fodder. 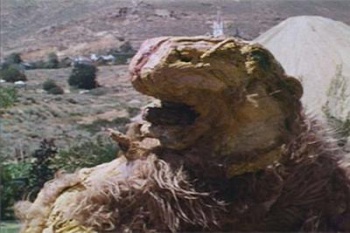 The existence of this movie boggles the mind – a fairly big-scale 1973 rural-indie production that mashes up a nonsensical mad-science plot with a weirdly elaborate political conspiracy thriller and ends with a lumbering monster sheep terrorizing a small town.

A well-meaning but none-too-bright redneck gets taken for a ride by ne’er-do-well local crooks, but gets rescued by a sheep farmer who lets him sleep in the barn. Following a psychedelic episode, he wakes up to discover that whatever (unexplained) phenomenon gave him visions has created a gruesome fetal sheep mutant. While he teams up with a scientist to study the wooly flesh-glob, a separate story plays out involving the corrupt mayor of a “frontier” tourist-trap town playing spy games with a property buyer that involves framing him for dog murder and … that’s kinda where I lost the thread, honestly. In the climax, the “Godmonster” (the sheep) breaks free and wreaks bloody havoc on the townspeople.

Food of the Gods

Bert I. Gordon (read the initials) is probably the king of bad monster movies achieved by compositing actual animals “giant size” into footage of “tiny” actors, having helmed such well-known (if not well-received) entries in the genre as Amazing Colossal Man, Earth Versus The Spider and Beginning of The End.

Working most prolifically in the 50s and 60s, he had a late-70s career revival with Empire of The Ants and this film, both loosely based on lesser-known H.G. Wells works that are today probably best known because of Gordon’s adaptations. Food involves an isolated rural farm where a mysterious chemical turns various animals into giants that threaten the usual grab-bag of human victims.

The main featured creatures are rats, which don’t look nearly as frightening as you might imagine, but in keeping with the broad strokes of the book there are also scenes featuring giant wasps and, most alarmingly, a man-eating chicken. And speaking of poultry …

I don’t know that I’ve seen another film as ambitiously bizarre yet ineptly realized as Blood Freak, one of the only films that can be described as having the effect of a bad dream (or bad “trip”) without exaggeration. Just the genre classification makes it a must-see, if you’re into that sort of thing: It’s a Christian, anti-drug, ultra-gory psychedelic horror film about a half-man/half-turkey monster.

And yes, he gobbles.

In the story, a biker returning from Vietnam is waylaid from his drifting by the comely sister of a pure-hearted girl he meets on the road. She offers him weed and sex, meanwhile a local mad scientist offers him a job eating LSD-laced turkey meat – y’know, for science. All this research hedonism gives him trippy visions and eventually transforms him into what I guess you’d have to call a “Wereturkey” that goes on a bloody rampage against fellow drug addicts until the Good Girl character cures him with the power of prayer. A framing device involving a narrator (the director) expounding on the evils of drugs and an oddly-edited final act suggest that the evil turkey stuff was meant to be taken as a hallucination, and that the film is clearly intended to be a serious endorsement of spiritually-centered sobriety.

The Ultimate Battlefield 3 Simulator Will Make You Cry