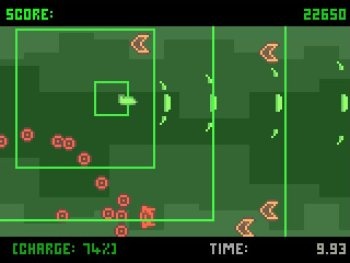 This week’s Alt+Escape comes with some heavy qualifications. First, it was created by designer Terry Cavanagh in roughly 48 hours – don’t expect a high level of polish here. It’s primitive, pixilated graphics actually get pretty exhausting after a few minutes, and its hair-pulling difficulty will probably limit its shelf-life to a solid 10 minutes or so. Considering a typical play session lasts anywhere between 10 and 20 seconds, however, that’s actually an accomplishment.

Bullet Time is a survival shmup with a twist: You can slow down time. (Bet you didn’t see that coming, eh?) The mechanics are pretty bare – you shoot constantly without having to hold down a “fire” button, there are a handful of different enemy types with unique (albeit simplistic) behavior patterns and even a power-up that temporarily boosts your firepower. But there’s no getting around it – you’re going to die. A lot.

That said, Bullet Time keeps track of your longest session (your performance is measured by your survival time rather than your score) and even gives you a rank based on your record. Which makes it an excellent candidate for a good-ol’-fashioned e-peen contest. My best time is 33.23 seconds. What’s yours?

Something for the Weekend

Penn Jillette Speaks Out on RapeLay