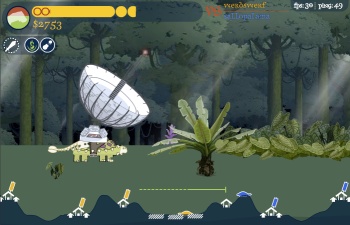 Sometimes, the best part about being under the radar is the freedom to do stuff that would never fly for a mainstream company. For example, I can’t imagine a AAA developer would have much luck getting financing for a game wherein you control a stegosaurus in a tanuki suit with a SAM site strapped to its hide. But that’s exactly the experience that Intuition Games‘ Dinowaurs offers.

A Scorched Earth-style 2-D dueling game, Dinowaurs lets you go head-to-head with other dinosaurs from across the globe in a battle to destroy your opponents’ villages. For a game with such a silly premise, it’s surprisingly complex: In order to truly get a handle on the gameplay, you have to wade through no less than three tutorials. Even then, it still might be confusing until you’ve played your first few matches.

But what Dinowaurs lacks in ease of use, it makes up for in style and charm. It features an excellent faux-retro soundtrack that you can hum along to between bouts. And the power-ups, while perhaps a bit overly complex, are an absolute riot. After all, what other game will let you dress up as a brontosaurus cosmonaut carrying a nuclear-capable supercarrier on your back?

Action Comics No. 1 Heads For Auction