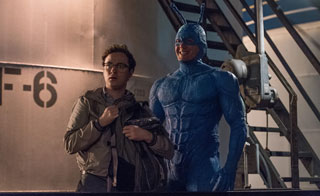 The Tick is getting a full season on Amazon Video.

A little over a month ago, Amazon ran the pilot episode of the new take on The Tick. Today, Deadline is reporting that Amazon has ordered a full season of the superhero spoof.

The Tick has been on TV twice before, including a live-action show and an animated series. In this incarnation, Guardians of the Galaxy’s Peter Serafinowicz stars as the blue-suited titular superhero, with Jackie Earl Haley (Watchmen) playing as Terror, the show’s villain. The official description of the show reads:

“In a world where superheroes have been real for decades, an accountant with mental health issues and zero powers comes to realize his city is owned by a global super villain long-thought dead. As he struggles to uncover this conspiracy, he falls in league with a strange blue superhero.”

The new season of The Tick will be aired next year.

First Battlefield 1 Story Trailer Shows Off the Campaign and Characters