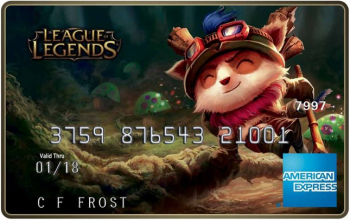 Riot Games’ League of Legends has its fans, and there’s a good chance a lot of them are about to welcome a new credit card into their wallets. American Express, in its latest attempt to woo consumers, has announced the launch of a Serve Prepaid Account card, each emblazoned with one of four Champions. But if you were thinking that a pretty picture is all you get, not so, as the card holder can earn Riot Points. You get 1,000 Riot Points just for signing up, and each time you load the card with cash – the first time you add $20, the first time you use Direct Deposit to add $20 or more, after you make your first 10 purchases – you get more Points, potentially as much as 13,000 in all if you jump through all of American Express’ hoops. After collecting all of those achievements, you earn more Points each time you use the card.

The Serve Prepaid isn’t a credit card. You load it up with cash from somewhere else, and then use the card to make purchases. American Express is hoping that this partnership will allow it to “expand our traditional reach beyond the mass affluent,” according to American Express’ Stefan Happ. American Express is looking at the game’s 32 million player base – worldwide – and thinking that now might be the time to grab a little of that 18 to 24 year old audience. “We are about loyalty, we are about contact and long-lasting engagement,” says Happ. “This is an ideal fit from an audience perspective.” It’s even gone so far as to become an official payment partner for the League Championship Series, and the official partner for World Championship.

So, fancy Teemo, Vi, Lux, Twisted Fate, the Summoner’s Cup or the League of Legends logo in your wallet? Sign up for American Express’ latest. Thousands of Riot Points could be yours – a $100 value, more or less – plus, of course, plenty more in the future should you keep using the card.