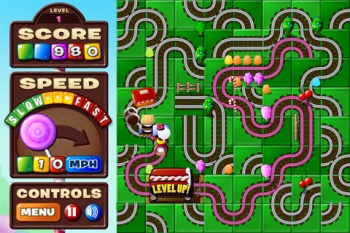 A long-forgotten PopCap game is now available for iPhone and iPad – so come on, everyone, hop on the Candy Train.

Back before PopCap was the giant of the casual games industry, it was a website where you could go to play fun Flash games. One of those games was a silly little title where you guided a cartoon locomotive around to collect candy by building the railroad tracks in front of it. It was called Candy Train, and it was actually really fun – though in the wake of Bejeweled, Peggle and Plants vs. Zombies it seemed lost to time.

Until now. Following Unpleasant Horse, PopCap’s experimental/offbeat studio 4th & Battery has released its second game – an iOS version of Candy Train. According to the iTunes preview, this release was actually thanks to one employee’s affection for the long-forgotten title:

Candy Train was an old and nearly forgotten PopCap title from many years ago. However, an aspiring game programmer, working in a different part of the company, loved Candy Train and thought it would be a great game for iPhones, iPod touches and iPads and so she started working in her free time to create a new version specifically, for these devices. She poured equal amounts of sweat, tears and love into this iOS adaptation of Candy Train and we think it’s great enough to share with the world.

And, by the way, the powers-that-be were so impressed that Sophia now works as a game programmer in PopCap’s game studio! We hope you enjoy this second release from 4th & Battery …

Speaking personally for a moment, I friggin’ loved Candy Train back in the day – so much thanks to the lone PopCap programmer who did the work, and for PopCap itself for making it happen.