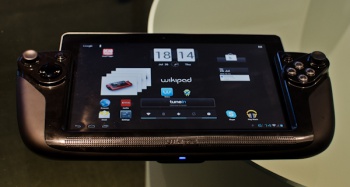 The Wikipad will feature open-source touchscreen gaming with optional buttons.

The gaming world has been keeping a very close eye on the upcoming Ouya console, set to bring Android gaming to television sets. You might be surprised to know that the Ouya isn’t the only Android gaming platform currently in development; another team has been hard at work on the Wikipad, a tablet that aims to combine the best features of touchscreen devices with handheld gaming systems. With a planned release and the end of Q3 this year, the Wikipad team revealed their recently updated specifications to VentureBeat to show consumers what they have to offer.

The Wikipad is planned to be one of the lightest and thinnest on the market, weighing 560 grams and powering a 10.1 inch screen capable of displaying a 1280 x 800 resolution. The device will use a NVIDIA Tegra 3 1.4GHz quad-core processor with 1GB of of RAM, which is actually fairly similar to the Ouya’s processing power. In terms of storage space, the Wikipad will come with at least 16GB, although since the design hasn’t been finalized it could go even higher. It will also use a 23.46Wh battery capable of six hours of gaming or eight hours of video playback.

One common criticism of tablet games is that touchscreens cannot provide the tactile responses that buttons do, so the Wikipad will address this concern by shipping with a proprietary controller. The controller attaches to the bottom of the tablet and wraps around the sides, converting the touchscreen into a device more reminiscent of a traditional gaming handheld. The controller will carry two triggers, bumpers, analog sticks, four primary buttons, as well as a standard start and select button. Additional, the controller redirects sound from the tablet’s standard speakers to enhanced speakers positioned on the controller’s front grill.

The Wikipad will launch with Android 4.1 and support game streaming through Gaikai, which should allow it access to a wide range of titles at launch. While the system hasn’t received the same public attention as the Ouya, the fact that multiple Android consoles were announced this year is very suggestive of developer-friendly trends emerging in the industry. The Wikipad’s success isn’t guaranteed, but with its release date fast approaching, it will be a good opportunity to see whether actual consumers are ready for an open-source gaming platform.