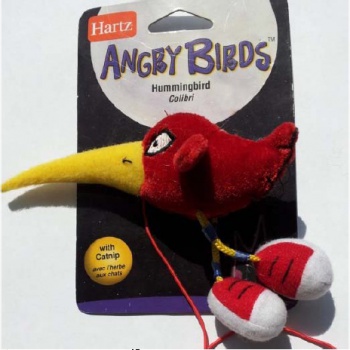 Juli Adams says Hartz had no right to sell the trademark, and is seeking a jury trial.

Back in 2006, long before Rovio set the casual game market on fire with birds and pigs, Hartz Mountain Company, one of the largest pet toy makers in the US, hired artist Juli Adams to design a set of cat toys. She came up with Angry Birds, dangly soft critters designed to be mauled, and did one thing many artists don’t: she retained complete ownership of the intellectual property. Along comes Rovio and Hartz, seeing an opportunity for profit, promptly sold its trademarks to Rovio without Adams’ knowledge or permission.

“When I was first approached, Hartz wanted me to have complete artistic freedom,” said Adams, who at the time she made the Hartz deal was a struggling artist doing the West Coast art fair rounds. That was where Hartz found her. “When I was flown off to the East Coast to meet with associates at Hartz, that’s when it started to feel real. They told me, ‘This is going to change your life.’ It got me really excited. I was convinced it would turn things around for me.”

Hartz only ever had limited licensing rights over the cat toys – Angry Parrot, Angry Rooster, Angry Hummer and Angry Robin – and that for a period of only five years. That didn’t stop it leveraging an exclusive deal with Rovio, using Adams’ IP as its bargaining chip. The Hartz-Adams agreement began in 2007 and came to an end in 2012, at which point all associated rights in the property would revert to Adams. Hartz never bothered to renew the agreement, so theoretically Adams now holds all the rights to Angry Birds pet toys.

Even the pet toy packaging referred to Adams by name, gave her website details, and acknowledged that she held the license, which ought to have tipped off Rovio that Hartz was not the sole rights holder. In total, according to the court filing, Adams received $11,228.59 royalties from Hartz, though the Rovio deal it signed would have been worth considerably more than that.

Adams seeks confirmation from the court that she is the rightful holder of the Angry Birds pet toy IP, as well as cash damages equal to three times Hartz’s illicit profits. Neither Adams nor her attorneys know how much the damages will be since they don’t have access to Hartz’s financials, which would tell them how much the Rovio deal is worth. They’re hoping for millions, but whether they get it or not is going to be up to the courts.