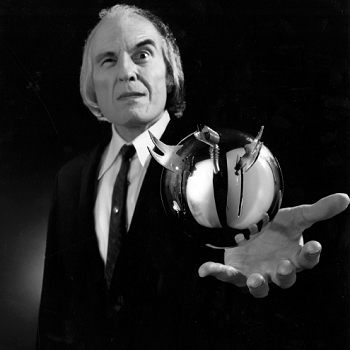 He played a good game, boy, but now the game is finished.

While everyone is rightfully mourning the loss of iconic singer/songwriter/actor David Bowie today, there was another famous passing that might hit a little closer to home for horror fans.

Angus Scrimm, the actor and author best known for his portrayal of “The Tall Man” in the Phantasm series, passed away on Saturday, January 9th, at the age of 89. According to reports, Scrimm died peacefully while surrounded by his loved ones, only to be ripped from said bed by a pair of Lurkers at the last second. It’s how he would have wanted to go, if you ask me. (What? Too soon?)

As the mysterious and nefarious “Tall Man,” Scrimm first broke into the horror scene in 1979’s Phantasm, Don Coscarelli’s cult classic which received three sequels between 1988 and 1998 and has a fourth scheduled for release later this year. With his haunting demeanor, superhuman strength, and collection of deadly metallic spheres, the Tall Man emerged as one of the most terrifying monsters of indie horror, earning a spot on nearly every horror aficionados “Greatest Villains” list in the process.

Aside from his role in the Phantasm series, Scrimm also starred in Coscarelli’s John Dies at the End, as well as 2008’s I Sell the Dead, and had a recurring role on the ABC spy thriller Alias.

While confirming the news of his friend’s departure, Coscarelli made sure to mention that Scrimm’s performance as the Tall Man “is a towering achievement in horror film history.”

“He was the last in a long line of classic horror movie stars. He was a terrific actor and an even better friend. He will be missed.”

He will indeed. Luckily for us, we’ll get to see Scrimm portray the legendary Tall Man one last time in Phantasm: Ravager, due out later this year. A teaser trailer for Ravager which was released over the summer is below.

A Major Marvel Hero Will Die In Civil War II