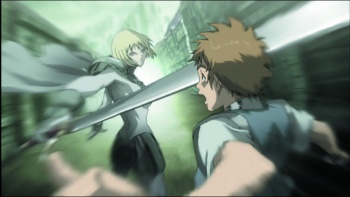 When it comes to anime, I tend to look toward action-based series with a cautious eye. Too often, it seems, writers for action series take the easy route and fill them with paper-thin characters and nonexistent stories. Entertaining at times, perhaps, but entertainment at its most basic. Which is why, when I first read up about Claymore, and found that the series was essentially described as “girl that wield giant swords fight monsters,” I was not enthusiastic. “Oh great,” I remember thinking, “this is going to be another giant mess of incessant and needless fight scenes with no plot and too much fan-service.”

Fortunately, I am happy to inform you that I was utterly and completely wrong.

Now, the setting of Claymore isn’t particularly unique: In a fantasy world modeled on – what else? – medieval Europe, an organization consisting almost entirely of tall, blond, female warriors who wield large Claymores hunt down demonic creatures known as “yoma” to protect humans. Well, okay. The group of protagonists being comprised almost entirely by tall blond women isn’t very common, especially in a shonen series, but still; this is essentially a “good guys versus demons” show, and it would be an understatement to say “that’s been done before.” So what’s so special about this one?

Perhaps the most important element that sets Claymore apart from the rest is its intensely character-driven story. Whereas many action shows shove character development to the wayside to make room for… well, more action, the characters in Claymore are at the forefront of everything; they drive the action. Because the story flows out of the decisions of the characters, there is a clear sense that actions do have consequences – something that’s oddly lacking in many other shows. So don’t expect an abundance of deus ex machina devices to bail the characters out of their bad decisions. This makes it much harder to predict the outcome of fights, because there are few characters you can easily bet on just because the plot dictates that they can’t die.

The dark themes of the setting also provide plenty of opportunities for character development. The secret behind the Claymores (the name given to the blade-wielding women by everyone else in this fantasy world, due to the swords they carry) is that yoma flesh has been implanted into their bodies in order to enhance their abilities. This comes at the cost of constantly having to battle against their yoma side, lest they “awaken” and become the very thing they despise. Additionally, those responsible for the creation and administration of the Claymores view them as completely expendable, quickly creating friction between the organization and its own foot-soldiers.

Unfortunately, the story starts to drag near the end, as the fights take longer and longer and become increasingly over-the-top. This would be less of a problem if the ending made up for it, but Claymore is sadly lacking in that area as well. Like many anime series, Claymore is based on a serialized manga series. And like many such anime series, the anime version of Claymore began production while the manga was still unfinished – in fact, the Claymore manga is still ongoing as of this writing. Suffice it to say, Claymore ends on a cliffhanger, leaving major plot threads hanging.

This is not to say that the ending is handled badly. In fact, for a series that is dedicated to following the manga’s plot, the ending of Claymore is handled quite well. It ends at a logical point, at the climax of a major story arc, rather than in the middle of an arc like other series I could name. And it does tie up a number (but certainly not all) of the major and minor plot threads. Still, it was a disappointment to see the otherwise excellent series end without a true conclusion.

Visually, the series is outstanding, with fluid fight scenes and crisp animation. Still, there was one issue I found with the art, and it really has more to do with character design rather than the art itself: Every Claymore has blond hair, silver eyes, and wears an identical outfit. Now think about the amount of facial detail you tend to get with the typical anime art-style and you’ll begin to see why this could be a problem. It doesn’t really rear its head for most of the series, however, in the last few episodes there are two dozen Claymores gathered at one place for a major confrontation, and nearly every scene just devolves into a guessing game.

Bottom Line: Despite its shortcomings, Claymore was an intriguing and entertaining show that held my interest all the way through. Dark themes, unique and well developed characters, and a gripping story combine to create something that is far more than your average action series.

Recommendation: If you’re looking for a more mature and, dare I say, sophisticated anime that is still at its heart an action series, Claymore is definitely worth a look.

Josh Viel thinks the world would be better off if every show’s cast was composed entirely of tall, blond women that carried around giant swords.