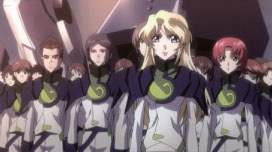 In the previous review of Heroic Age (Part 1), I covered the finer details of the first thirteen episodes; who our characters were, the state of the warring galaxy, and the ever-increasing battery of celestial bodies that Belcross was inclined to drive his fists into at any given opportunity. Thirteen episodes, several space battles, and one climax later, I’m sorry to say that very little has changed.

If you were to grab a random episode from the series lineup and point to the cast of characters, it’s unlikely that I would be able to identify how far into the series that episode fell as virtually nobody ever changed. The angsty hotshot pilot – thankfully – lost his angst and one of the five Nodos switched sides, but that was about the extent of any “character growth” I encountered in Heroic Age. This static nature may have been a blessing in disguise, however, as Mehitak’s defection to the Iron Tribe proved to be a decidedly ham-handed affair. After pledging his life and loyalty to the Iron Tribe, he turned around a few scenes later and asked that they not make him fight. Shortly after, he went and fought anyways. The dynamics of a changing character apparently required a skill set unavailable to the writers on this particular project.

Age and, by extension, Belcross figured significantly less into the second half of the series, so fewer battles were won simply by virtue of his presence and planet-shattering fists. Belcross’ penchant for punching increasingly oversized objects reached its zenith in Part One and was reduced to a more manageable level in the second half; he spent most of his time playing fist-to-face with the more reasonably sized Nodos instead, with the exception of a handful of Bronze Tribe ships and a single moon that found itself in sudden need of a new orbital pattern.

With Belcross spending less time pounding away on the figurative I.W.I.N. button, there was more screen time for fleet-to-fleet battles between the Iron Tribe and the allied forces of the Silver and Bronze Tribes. These occasionally made for some interesting battles but more often felt like backdrop material for the story’s other events, a feeling that was reinforced by the complete and utter lack of dramatic tension. Yes, plenty of ships were destroyed and, arguably, thousands of people died. However, not one of those people had a face, name, or even a scrap of information presented in such a fashion as to make me care that they were dead so it’s difficult to view the crumbling ships as anything more than flying meat lockers.

Heroic Age‘s second half eventually went in some unexpected directions via inter-Tribal diplomacy, schisms within the previously unified Silver Tribe, and the unveiling of what the true purpose was behind the surviving members of the Heroic Tribe. Unfortunately, one of those unexpected directions also included the ending, which apparently chose to go right off the deep end.

I’m not entirely sure at what point the space opera I was watching turned into a pseudo-existential cluster[removed] that actually required a character’s narration to make even the slightest hint of sense, but that turning point was definitely somewhere near the end. Fortunately, by that point, I no longer cared enough to expend the energy it would have required to make sense of it all.

If I had to tie both of my reviews into a single summary, it would simply be this: wasted potential is truly a crime. Heroic Age may not have had a stellar start out of the gate but it was at least a solid contender for your sci-fi dollar. The second half of the series washes that away in a parade of bland storytelling lacking in drama, punch (no Belcross jokes intended), and a sensible ending. The potential may have been there but the execution was clearly lacking.

And I honestly find that a shame.

Bottom Line: Heroic Age lacked the follow through necessary to finish what it began in the first half of the series and the supporting cast was eventually overwhelmed by the rest of the show’s flaws. What potential the show had was drowned in poor execution.

Recommendation: If you watched the first half you may want to see the series through to the end for the sake of completion, but if you’ve given the series a pass thus far you might as well keep walking.

James Henley managed to get through the entire review without tacking the words “in space” onto anything, despite all desires to the contrary.