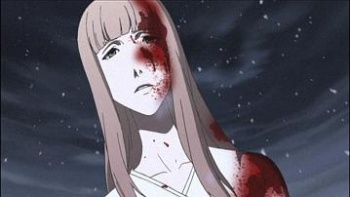 In Red Garden‘s New York City, four high-school girls worry about what happened to a fifth girl that they barely know. They make the mistake of stumbling upon a spooky house … and the next day, they wake up, tired and confused, with no memory of what happened. Meanwhile, one police detective isn’t buying the story that the corpses that keep turning up in the woods are just teenage girls committing suicide. Something’s going on. Something beyond life and death.

Unlike Bleach, Blood+, or other “secret wars against the supernatural set in the modern day”, Red Garden spends most of its time following the four high-school girls around, showcasing their life’s problems in soap-opera detail. Rose’s father ran away, so she has to take care of her younger siblings. Claire doesn’t want to sponge off her rich dad, and the increased stress of monster-hunting threatens her job and her relationship with her boyfriend. Kate is a hall-monitor at the private school, and she doesn’t get along very well with the other prissy students. Rachel is the “popular girl” stereotype, and her moonlighting activities spent hunting monsters is really cramping her social life. The only thing the four girls have in common is that they all must work together to fight monsters, and it takes several episodes – and several team-building incidents – before they can work together.

A cliché of the anime genre are the internal monologues of female characters as they find themselves unable to vocalize their feelings … or their wide-mouthed shouting at the last minute of “don’t die!” to the more dynamic, male characters. Red Garden avoids those pitfalls. The characters behave like real teenagers. They gaze at their shoes, they mumble a lot, they cry into their pillows as they can’t bring themselves to say how they really feel or to resolve what’s going on. The 22-episode format of the TV show lets the story take its time and allows for quiet, dramatic moments – promises that many anime make, but few of them, like Red Garden, actually deliver.

To a Westerner who’s seen CSI:NY, Law & Order, or any other dramas set in New York City, Red Garden will come off as hopelessly under-populated and naïve. Red Garden aims straight for the young adult fantasy crowd – and it hits high marks, with its strong attention to realism, meticulous pacing, alternative character design, and superior production values. Red Garden is high on drama on story, and it’s low on gratuitous nudity and gore.

The fight sequences are sparse, but they’re rendered in gruesomely realistic detail. The “monsters” are ordinary people, despite their curse, and they never morph into anything strange – it’s a tribute to the direction of how the characters are animated to run on all fours and bite like savage dogs while still keeping their realistic designs intact. People are choked with steel chains or beaten with baseball bats – ridiculous swords or magic wands are nowhere in evidence. There’s lots of punches, kicks, and grabs … which actually amplifies the horror, as a male character overpowering little high school girls creates a heavy metaphor for rape.

The realistic tone can sometimes be at odds with the clichéd contrivances of the horror genre. (Oh no, our cell phones don’t work in … the middle of NYC?) And in an odd stylistic choice, each episode has the characters break into a song! Sadly, neither the Japanese nor the English voice cast are up to the challenge, so the drama that just built up for 20 minutes can suddenly dissolve.

Bottom Line: Red Garden is a superior entry in the modern-day teenage-horror genre. If it were a live-action series, it could easily run on Western prime-time television, where it would shine above Heroes, Dollhouse, and other young-kids-in-strange-trouble shows, because of its superior pacing and its genuinely scary moments.

Recommendation: If you’re running an old-school anime club where you show one episode a week, Red Garden would cleanse the palate if you ran episodes of it between the giant-robot and the street-fight shows. It’s designed to be watched like a TV series – one episode a week, waiting for the next big reveal.

Funimation’s Red Garden DVD set packages the complete 22 episodes, so you can see the show from the beginning to the ending climax. Also included is the OVA, which really just serves as an example of how bad Red Garden could have been – it’s a 46-minute story about super-powered teenage girls with unlimited resources who fight crime in a futuristic New York. Stick with the TV series.

Norman Rafferty has no regrets about becoming a chevalier, as he now travels the world by his mistress’ side as they rid the world of the chiropteran menace.

Is the ESRB’s Time Running Out?