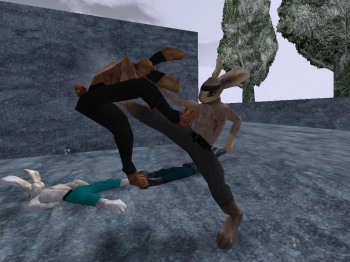 Apple has approved an illegal, counterfeit version of Wolfire Games’ Lugaru for the Mac App Store.

Wolfire Games of Humble Indie Bundle fame released Lugaru, its third person action game starring an anthropomorphic bunny rabbit, on the Mac App Store under the name Lugaru HD for $9.99 at the end of January 2011. Just two weeks later, a game called Lugaru popped up on the App Store for $0.99, without Wolfire’s knowledge. It’s evidently a counterfeit version of Wolfire’s game, but was approved by Apple anyway.

The $0.99 version of Lugaru was released by a company called iCoder whom Wolfire has been unable to contact. Wolfire distributed the source code for Lugaru after its inclusion in the original Humble Indie Bundle, and iCoder took that code and basically released it as its own game. A very shady move.

Kotaku reportedly got a statement from iCoder that reads: “We have every legal right to market and sell the software … The license we were granted allows for non-exclusive redistribution of the source code or the compiled product, modified or unmodified, for a fee or free of charge.” Wolfire disputes this claim, pointing out that open source software is not freeware, saying: “The license made it very clear that the authors retained all rights to the assets, characters, and everything else aside from the code itself.”

It’s like a pirated version of a developer’s game being sold right next to the legitimate version in a retail store. Wolfire has contacted Apple for an explanation, and to perhaps receive remuneration, but hasn’t heard back as of this writing. Even if Apple realizes its mistake, Wolfire believes it may have lost valuable sales in the process.

Thanks for the tip xpk3, Matt Redmond, and Madd the Sane!