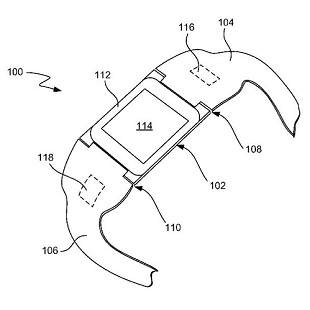 Apple’s forthcoming wearable has sensors in the wristband, is part of a “personal wireless environment.”

There’s been no shortage of Android Wear news from Google this summer, but we’ve heard nary an official peep from Apple about its presumed foray into the smartwatch market. But the silence has seemingly been broken for the moment, as Apple Insider has come across a broad USPTO patent award to Apple for an “iTime” concept.

The iTime patent, which can be poured over here, has dashes of both old and new. References to the sixth generation iPod Nano — the square job that every accessory company on the planet made a watch band for — are made, but the outline also includes veiled references to Apple’s future, specifically the changes coming with iOS 8.

In a nutshell, the patent describes a central, portable media player-style device that is secured within a detachable wristband. The latter component isn’t just rubber or silicone, however, as the band has its own sensor suite that connects with the central PMP device. This is where gesture support comes in — waiving your wrist or arm to trigger events or applications. “the gesture might be a horizontal movement for one user input option (e.g., decline incoming call),” says the patent description, “and might be a vertical movement for another user input option (e.g., accept incoming call).”

A detachable wristband also lines up perfectly with Apple’s penchant for accessories. While a “Made for iWatch” program might be needed to keep participants in line with standards, it’s easy to see why every company currently making iPhone accessories would want to jump on the Apple wearable bandwagon. Apple would manufacture the central component, and a handful of wristband options, but it’s all about options (and collecting fees on those options).

As far as iOS is concerned, the iTime patent references a “personal wireless environment,” which would likely work in harmony with Apple’s plans for iOS 8 and OS X 10.10. If your home network can connect your iPhone and iMac, why not an iWatch as well. This all feeds into the continuous client future that Apple is laying the foundation for later this year.

The Walking Dead Season 2: Amid The Ruins Review