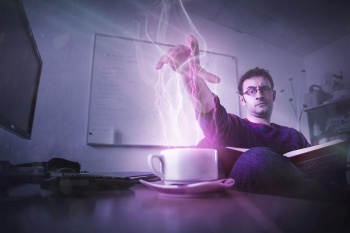 According to CERN theorist “Ben Kenobi”, the Large Hadron Collider confirmed the Force from Star Wars is completely factual. Hey, what day is it today?

Man, I love April Fool’s Day – the one time of year where the internet comes together to tell outrageous lies in spectacularly hilarious fashions.. And it isn’t just Google and video game companies either, honest to goodness scientists are getting in on the action too. That’s why you can read a very official looking press release from CERN confirming that the Large Hadron Collider just proved the Force exists – as in, the one from Star Wars taught by orders of space monks.

“The Force is what gives a particle physicist his powers,” the University of Mos Eisley’s Ben Kenobi explained. “It’s an energy field created by all living things. It surrounds us; and penetrates us; it binds the galaxy together.”

According to CERN, the road to the discovery began with Kenobi’s paper “May the Force be with EU”, proposing that R2-D2 droids be used to assist data collection from from the accelerator complex. This allowed CERN to confirm the Force as a “documented” phenomenon alongside the universe’s other fundamental forces – the strong force, weak force, electromagnetic force, and gravity. Of course, the announcement goes on to suggest that not all researchers agree on how this discovery should be used. Rumors are flying that “Dave Vader” has dismissed the Force’s cosmological implications and is gathering rogue researchers to build his own research station.

We’re already looking at a fantastic April Fool’s Day among the entries we’ve already mentioned, but this might be my favorite – it even dismisses the theory department’s “crackpot idea” about midi-chlorians. It’s always exciting to know that scientists unraveling the mind-boggling nature of our universe still love fast-paced science fiction as much as the rest of us.