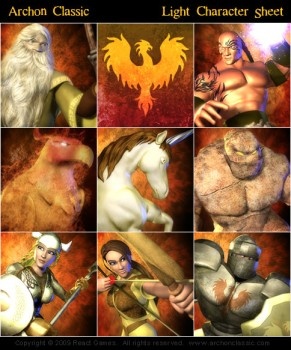 Archon, the mid-80s strategy classic for the Commodore 64, is being revamped for the PC and is expected to come out in time for the holidays.

Formally known as Archon: The Light and the Dark, the game was originally released in 1984 for the Commodore 64, Atari 8-bit series, Apple II and several other platforms. The combination of chess-style strategy and real-time combat between the mythological game pieces made Archon an instant hit and one of the most highly-regarded games of its era. Now, a quarter-century later, it’s being remade for the PC, with new game modes, support for up to four players and numerous other “surprises.”

“In bringing Archon to the PC we’ve really focused on maintaining the classic feel of the original game,” said Brad Moss, lead designer at React Games, the studio behind the remake. “That said, there were aspects of the title that needed updating for the modern audience. For example, the addition of 4 players was never in the original, but it adds so much fun it feels like it always belonged there.”

Along with the four-way “teams” and “versus” multiplayer game modes, the updated Archon will include a series of new gameboard layouts, character leveling and power-ups, enhanced AI and, as a tip of the hat to fans of the original, the option to choose either classic 8-bit images or all-new, high-resolution artwork. The game will also feature online leaderboards, achievements and both online and local multiplayer options.

The PC remake isn’t actually React’s first crack at Archon; the studio released an iPhone version of the game in June which quickly became one of the App Store’s 20 best-selling games worldwide. A new single-player version, Archon: Conquest, has also been submitted to the App Store and is expected to be available soon.

Pre-sales for the new Archon PC will begin on October 15 at archonclassic.com.

Grab A Look at Canceled “The Flash” Superhero Game