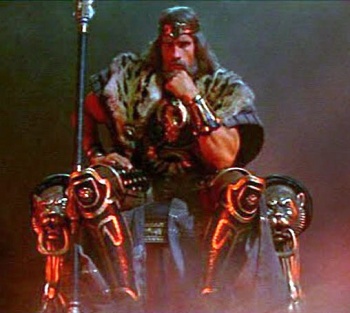 Conan the Conqueror will return Arnold Schwarzenegger to what’s best in life once it finds the right director.

Arnold Schwarzenegger’s latest films haven’t recaptured his past glories, but one project might turn that around: The Legend of Conan. This sequel to 1982’s Conan the Barbarian is the sword-and-sorcery equivalent of Unforgiven, following the final days of an iconic warrior. There’s just one problem – production has seen multiple delays over the years, leaving many wondering if the project was shelved. Thankfully, Schwarzenegger promises that’s not the case, he’s just looking for the right director.

“As a matter of fact, [The Legend of Conan] has been written,” Schwarzenegger told fans at a black tie event in Birmingham, “and we are now looking for directors so this is a serious drive.”

The Legend of Conan takes place years after the events of Conan the Barbarian, when Conan rules the land as king. Specifics on Conan’s final adventure are light, but Arnold took the opportunity to share some details, including a possible name change. “Conan the Conqueror [is] where I’m sitting on the throne for years and years, decades, and then all of the sudden, the time comes when they want to overthrow me,” Schwarzenegger explains. “So that story will be told and that movie will be done.”

Producer Fredrick Malmberg later confirmed these statements on The Arnold Fans website. “Chris Morgan and I are meeting with directors at this moment,” he said. “Interest is high, many are fans of Conan but we are not rushing. We have a great script and now we need the right director for the job.”

The Legend of Conan was originally supposed to start production in 2015, during which time no progress occurred. But if Conan the Conqueror is a rebranding, and not some slip of the tongue? It could be a sign that Conan‘s final chapter is on the way. If so, the finished movie should hit theaters in either 2017 or 2018.

Source: The Arnold Fans, via GamesRadar