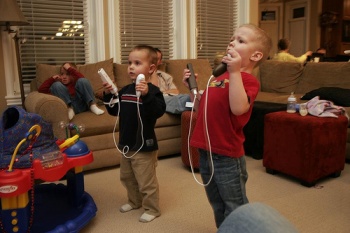 A blogger has written a scathing review of the Wii console and why it sucks so hard.

The stated mission of the website Bright Hub is to “share knowledge about how the simplest scientific idea evolves into tomorrow’s technology.” You may be surprised to discover that the website is currently hosting an article titled, “5 Reasons Why the Wii Totally Sucks” as that seems to have nothing to do with the mission statement. The article is part of a point-counterpoint series with it’s sister post declaiming the 5 wonders of Nintendo’s console. The five reasons supplied for the Wii’s suckage are generally what you’d expect (graphics, casualness, low third-party support, friend codes) but the author actually says that the motion controls are part of why he hates the Wii.

“Let’s talk about the vaunted “motion controls” for a second, shall we?,” author Benjamin Sell said. “When the Wii first debuted, everyone was in awe of the ability to swing a controller and have their on-screen avatar do the same. People decided that it was just like actual tennis, or baseball, or bowling, marveling at the geniuses at Nintendo that had delivered this new revelation from on high like Moses carrying his tablets.”

Spend any time with Wii Sports, however, and you begin to notice that the revolutionary controls of the Nintendo Wii are not terribly different from those of any other system, aside from requiring you to flail about like an idiot.

Sell goes on to state that if wanted to get “exercise,” he would do so outside and that videogames should be exempt from such activities.

While I may agree with Sell’s take on the graphics and the expanse of “shovelware” released for the Wii, I take umbrage with his complaint that the console is hard to connect to the internet.

“You need to connect your Wii to the internet, a daunting task in itself for anyone with less-than-average tech savvy,” he said. I don’t know about you, but all I had to do was turn on the console and my Wii connected to my wireless network immediately, with no setup required at all. I’ve never heard anyone complain about connecting their Wii to the web, but maybe I’m relying too much on pure anecdotal evidence. Has anyone else had any trouble with this?

Advice From a Fanboy