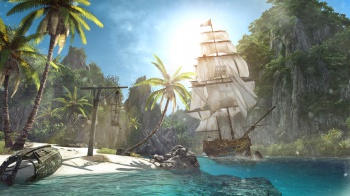 The Golden Age of Piracy is a particularly polarizing setting for any piece of media, let alone a videogame. Combating the constant “Yarrrh Matey!” jokes and striped outfits is something I was concerned about when the game was first announced, but the development team at Ubisoft has so far made good on their promise: Assassin’s Creed IV: Black Flag is a dark, gritty open-world pirate sandbox.

I began my single-player gameplay experience in Sequence 3, so as not to give away any story spoilers. I immediately sailed into the gorgeous blue waters of the Caribbean Sea, anxious to find a shark to harpoon. My mission was to go to a nearby island to test out my hunting skills.

First introduced in AC3, the hunting skills are similar in mechanic, but have been improved thanks to the addition of team members who worked on Far Cry 3. My first kills were iguanas and the unfortunately adorable ocelots. I say unfortunate because, though I never hesitated to kill a redcoat in AC3, these large cats I’d rather have as pets than pelts. The improved crafting system allowed me to take my spoils and immediately turn them into upgrades like gun holsters or gauntlets, instead of having to find an artisan.

After I completed the tutorial hunting mission, my Quartermaster, Adewale, sent me to another island to recruit team members to help man The Jackdaw, Edward Kenway’s upgradeable ship. As soon as I arrived on the island, the sights and sounds of the pirate lifestyle surrounded me. From the red parrot squawking to the pirate band playing on a wooden stage, everything said “This is a PIRATE game,” yet in a very organic way.

Once I recruited enough team members I returned to the Jackdaw and went back out to sea, where I promptly engaged in a naval battle with a passing brigand. You can use the Spyglass tool to scout ships from afar to see what level they are and what cargo they are carrying to assist in your decision to engage or not. Despite this information, I engaged, but soon realized the Jackdaw was not capable of taking down this ship as I desynchronized several times in a row. The open world level progression system clearly told me I needed to acquire more resources to upgrade my ship before attempting this battle again.
I went back to the main quest line where I met up with Ben Hornigold and Edward Teach, otherwise known as Blackbeard. I won’t go into story details here for fear of spoilers, but it is apparent these guys will be hanging around Edward for quite some time.

I went on several more missions where I got to see the return of familiar mechanics including Eagle Vision, tree traversal, eavesdropping, and, of course, hiding. Hiding locations are marked on the mini-map, which is great when you need a fast getaway, but I’ve always been the player that wanted to run into conflicts guns blazing, which is much more difficult in AC4 given the upgrade to the enemy AI. Not only are many enemies more difficult to kill, but there are soldiers that can run faster than you and even tackle you from behind, something I found extremely irritating, but challenging all the same.

The really exciting part about AC4 is the naval open world. You’ll be spending quite a bit of time on the Jackdaw traversing islands, so it is worthwhile to make sure she is upgraded. You can earn items to sell for upgrades by treasure hunting on sandbars, exploring caves, and, of course, taking down other ships. The naval battle experience has been significantly improved including multiple gun upgrades, ship armor, and even mines that you can drop into the water. I felt that the ship AI was much more aggressive than in AC3, forcing me to be smart about which ships I chose to engage with and determining whether their cargo is worth the risk.

When you are out sailing, one of the many activities you can do to earn more gold is to go diving. I saw this mechanic extensively while visiting Ubisoft Singapore, where the underwater gameplay was created. It is a unique addition to a parkour, free-running game that swaps roof jumping, for shark dodging underwater. Edward is particularly vulnerable while diving, as you do not have any weapons or armor. There are eels, urchins, sharks and other varieties of sea life guarding their territory, which is filled with treasure chests to open. You can’t scout this treasure like the booty available on ships, but the underwater world looks so beautiful on next-gen tech, you probably won’t care what the loot is, until you get eaten by a bull shark, at least.

After several hours with the game, I can confidently say this is the best looking Assassin’s Creed game to date, and I can’t wait to get lost in the beautiful Caribbean world. The pirate theme was masterfully woven into every part of the game I played, right down to the customizable costumes, and no, there weren’t stripes. I hope the writing team doesn’t let me down with the main quest line, as that was the Achilles Heel for AC3 (yes, pun intended). But, everything I have seen so far is teeing up AC4 to be one of the most unique open world experiences I’ve ever played.

I spoke with Game Director Ashraf Ismail about the present day settings and what Abstergo Entertainment is. He told me about the new first-person perspective in present day, and where you can find clues about the future of the Assassin’s Creed franchise. To hear our chat, please check out my video preview!

If you’re into multiplayer, you can check out some additional details right here!

The Escapist Staff Preps for Expo 2013