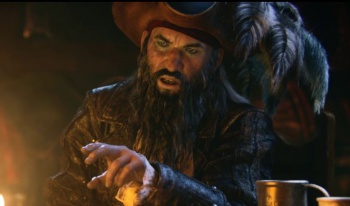 Pirates might have been supplanted by zombies in our current cultural lexicon, but Black Flag proves there’s plenty of charm left in the sailor’s life. You could argue the best parts of last year’s Assassin’s Creed 3 were the naval missions, but they were somewhat linear and you could only explore a small area of the seas when playing them. Black Flag opens up the whole Caribbean, and you are free to sail wherever you would like, attack whatever brig or schooner looks appealing, and have a blast doing it. Oh, and there’s also some Templars to kill, naturally.

In contrast to overwrought videogame stories, Assassin’s Creed IV presents a pretty basic narrative without seeming clichéd. Edward Kenway is tired of being poor peasant, so he leaves his girl in Wales to make his fortune as a privateer. The ship he’s sailing on is sunk by a guy in a fancy hooded costume, and the two wash up on an island together. Kenway kills the Assassin , steals his clothes, and heads to Havana to sell the information the Assassin was peddling on an ancient artifact called the Observatory. The Templars there take him in, but eventually things go sour and Kenway has to escape. Once he steals a ship and names it the Jackdaw, your life as a proper pirate captain begins.

What’s interesting about this opening is the character you’re playing initially has no allegiances in the ongoing struggle between Templars and Assassins that’s a fixture of the series. Kenway wants gold and power, but he also respects the freedom that’s a tenet of the Assassin creed. The Observatory is also a symbol of some current events in our world – the device lets you spy on anyone anywhere – and the Templars want it to commit some serious NSA-level intrusions of liberty. In the modern-day sections of the game – very short sequences in which you play as an Animus operator ostensibly researching for a pirate film – Abstergo Industries wants to control the Observatory, too, of course.

But that’s all framing to support what is a truly huge open world, erm sea, to explore in your pirate ship. From Florida to Jamaica, from the Yucatan to Tortuga, you can travel to every inch of the map, set ashore on small sandbar islands or major settlements to dig for treasure or perform assassination contracts. When you start out, it makes sense to discover as many settlements as you can to unlock fast travel points. The fast travel system allows you to move quickly when you want to, but in Black Flag just sailing between points of call is an adventure. Your spyglass is an essential tool; you can use it to identify ships on the horizon – as well as what they are carrying – and investigate island locations, marking them for further exploration. Set your sails to the fastest “travel speed” and the game’s UI disappears. Your sailors will sing traditional sea chants, and it’s a pleasure just to take in the beautiful setting sun as you ride the waves. Black Flag makes you feel like a pirate.

Enough talk about pretty things, it’s time to blow some shite up. You’re not truly a pirate until you start pirating. You pilot the Jackdaw using intuitive controls, and firing broadside cannons on your prey is as simple as aiming a gun. Momentum is important, and you’ll be adjusting your sails often in navel engagements to turn quickly or to speed past enemy guns before finding a good opportunity to fire yours. There’s a bit of figuring out how to approach enemy ships, and if you can get behind them to fire your first volley of chain shot with your chase cannons at the bow, you’ll do well in disabling even Spanish brigs or English man-o-wars. Once the ship is disabled, i.e. its health is low enough, you can board her. Your men will throw grappling hooks to pull the two ships close together, and Kenway can jump on to the enemy deck himself to swiftly kill crewmen in hand-to-hand combat . It’s a great dual system that rewards both skill in naval combat, and the pirate action you’ve wanted to indulge in since watching Pirates of the Carribbean. Swinging onto the enemy ship, climbing into the rigging, and air assassinating two crewmen is endlessly satisfying.

On land, sneaking is usually preferred to straight-up combat. There’s a lot more opportunities to hide in thickets of foliage or haystacks to avoid detection. Holding a shoulder button or trigger lets Kenway free climb up most buildings and obstacles, letting you parkour like a YouTube champ. Ubisoft has improved the climbing algorithm so that you’re not running up unwanted surfaces very often. If you don’t feel like running or hiding, guards can quickly overwhelm you, but clever use of counter attacks can usually defeat large numbers quickly. Combat is virtually unchanged from previous games, with swords, pistols and special items like smoke bombs you can use to great effect. In general, the combat system lacks nuance and patience is all you need to kill your foes. 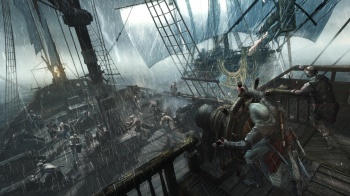 The Assassin’s Creed excels at providing oodles of gameplay in every corner, and that holds true on the sea as well as inland. You’ll still synchronize by climbing up tall structures to get a bird’s eye view of the surrounding area. Most locations like towns or cities have dozens of collectibles to gather such as chests of gold or fluttering sheets of music that unlock new shanties when you grab them. Treasure maps and Mayan pillars both offer a visual puzzle for you to solve to find riches. Assassination contracts are available throughout the world, and these provide a short yet fun objective of sneaking into a guarded compound to take out a target. There’s always some way to press the pleasure pedal in Black Flag.

The story missions are varied, and the series continues the trend of optional objectives like staying out of combat or performing specific assassinations which lets you play how you want. There are still a few missions that demand you to stay undetected or restrict you from killing enemies, and while these could be frustrating at times, the challenge was appreciated. Mission checkpointing is generally well-placed, but there were a few instances where you must replay large chunks if you fail. When those two occur simultaneously – restricted gameplay with poor checkpoints – Black Flag suffers, but it only happened on a handful of missions.

Crafting and upgrading has been streamlined, with Ubisoft taking a cue from Far Cry 3‘s simplicity. You can hunt animals such as howler monkeys or wild pigs for their parts, and a crafting menu will let you unlock extra ammunition storage, or more health. New to Black Flag, you can find areas on the open seas to harpoon aquatic animals like hammerhead sharks or humpback whales. It can be a fun activity to toss a harpoon, and be pulled along by the huge animals, but the blood in the water and the image of the hanging whale or shark you killed may make you pause. If you don’t want to hunt, but still want to upgrade, you can purchase hunting ingredients at most shops in town for a hefty price. Upgrading your ship is also costly, and for the truly good stuff like extra hull shielding, you need resources like metal and cloth. The only way to obtain those is to take down ships, which in turn makes those upgrades even more valuable. It’s a genius risk/reward loop, and you’ll spend a lot of time in your captain’s cabin lusting over more powerful cannons or mortar rounds.

Perhaps the most gratifying open world activity you can perform in Black Flag is taking over a coastal fortress. The major military powers in the region have forts which can shell passing pirate ships, and are generally jerks, especially if your wanted level is high from boarding innocent trading ships. You can take the power back by assaulting the forts, using mortar attacks for long range fire, or sailing nearby to use your broadside cannons. You have to be careful to avoid returning mortar fire, and there’s always a powerful brig patrolling nearby. Once you destroy all the fort’s defensive structures, you can lead a land assault on the base, take out the officers, and find the war room to assassinate the fort’s commander. Raise the black flag, this stronghold is under pirate control now, and that unlocks a fast travel location, an officer you can bribe to reduce your wanted level, and new naval assassination missions. The fort location turns green on your map, and you have a visual on every location and collectible in the area. Some of the forts are easy to assault, while others have many more defensive mortars and whole fleets of ships protecting them, so it can be quite an undertaking. The whole epic sequence of taking over a fort really makes you feel like you’ve accomplished something important and impacted the world.

While Black Flag feels very much like an Assassin’s Creed game, its gameplay reminds me more of Sid Meier’s Pirates! wrought in glorious 3D. As in that classic game, you are free to sail wherever your heart desires, and be as dastardly or as benign as you like. Embodying Edward Kenway and living through his adventures on the seas, while also experiencing his struggle with Assassins and Templars alike, is pure escapist delight.

This review was based on the PS3 version of the game.

If you’re interested in the Assasin’s Creed universe, please check out Mike Kayatta’s Pick Your Path feature, New World and don’t forget to find out which Assassin’s Creed protagonist you are by taking this personality quiz!