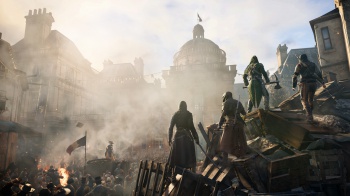 Financially speaking, 2014 looks like a great year for Ubisoft, with Assassin’s Creed Unity and Rogue taking the lion’s share of sales.

2014 was an ambitious year for Ubisoft, thanks to two Assassin’s Creed releases and a bigger push into next-generation consoles. Unfortunately, any good features Assassin’s Creed offered that year were drowned out by game-breaking bugs, confusingly huge patches, and other problems culminating in a cancelled season pass. But despite those issues, Ubisoft’s performance was far better than expected. In fact, Assassin’s Creed Unity and Rogue had sold a combined 10 million copies by the end of Q3 2014.

These figures were revealed in yesterday’s Q3 financial report, where Ubisoft showed noticeable improvement from 2013-2014. Compared to last year total sales increased by 55.8 percent, with Assassin’s Creed being one of the best performers. While we don’t have specific figures comparing Unity and Rogue, it’s still an impressive number.

For context, Assassin’s Creed IV: Black Flag earned 11 million sales by year end 2013. That gives Unity and Rogue another five months to catch up, which is certainly a strong possibility. Meanwhile, Far Cry 4 sold 7 million copies while Watch Dogs has brought in another 10 million since May.

“In 2014, Ubisoft offered gamers the most diversified line-up in the industry,” Ubisoft CEO Yves Guillemot wrote in the report. “This uniquely varied offering was also recognized for its overall quality. As a result we achieved a third-quarter performance that was well above target and we expect to generate a record level of free cash flow for 2014-15 … Each of these successful games was developed by our in-house studios and we own our brands, which means that our destiny is in our own hands and we are internalizing the value created for our shareholders.”