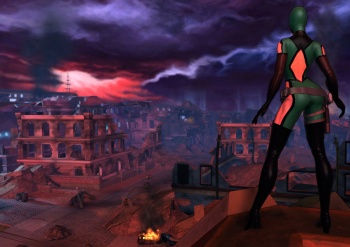 As of March 31, Cryptic Studios is a “discontinued operation.”

The Silcon Valley-based MMO developer, which Atari purchased in 2008, is the key casualty of the publisher’s latest earnings report.

“In line with the previously stated strategy of fewer but more profitable releases and further expansion into casual online and mobile games, the Company has determined that external development creates more flexibility in the changing marketplace,” the report explains.

Hoping to reassure an understandably wary playerbase, Atari has pledged to continue support for Cryptic’s most recent MMO titles, Champions Online and Star Trek Online, until it has finalized a sale of the developer.

A comment from Cryptic community representative “WishStone” on the official STO forums corroborates that pledge, saying “Support for Champions Online and Star Trek Online will be continuing as normal, our staff is working hard on their projects and there are no planned changes to the way any of our games and projects will operate.”

The comment also claims that this news “sounds way more dramatic than it actually is,” though there is no word on what, if any future plans Cryptic may have.

It should be noted that this news comes only four months after Champions Online adopted a free-to-play subscription model. It’s unknown if that has anything to do with Atari’s decision to cut ties with Cryptic, though it seems likely that the developer’s $7.5 million operating loss during the last fiscal year played some part in the move.