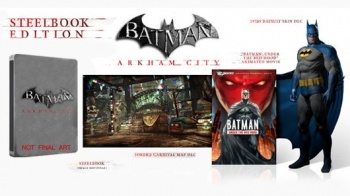 If you’re Australian and you’ve ever wished that Batman would wear something a little bit more colorful, then the Steelbox edition of Arkham City might be exactly what you’ve been waiting for. This collector’s edition contains a new bat-suit for the Dark Knight, straight out of the 1970’s comic books, when Batman’s sartorial choices were something other than black and grey.

As you can see in the picture above, the 1970’s DLC skin gives Batman a blue cape, trunks, and cowl, and sticks the bat-symbol on his chest in the middle of a yellow oval. Purchasers will also get the Joker’s Carnival challenge map DLC, as well as a copy of the animated movie Batman: Under the Red Hood, one of the most critically acclaimed animated Batman movies ever released. The PC and Xbox 360 versions will include a DVD copy of the movie, while the PS3 version will include a Blu-Ray copy. Obviously, it goes without saying that the Steelbook edition also comes with a Steelbook case.

The Steelbook edition is exclusive to EB Games Australia and costs $98 AUD, which is the same as some other retailers are charging for the regular edition of the game. The content itself isn’t exclusive however; the Joker’s Carnival map is available as a bonus for anyone in the US pre-ordering from GameStop, for example, and the 1970’s costume is a pre-order bonus from certain UK retailers. If you are in Australia though, it’s hard to see any reason not to grab the Steelbook edition.