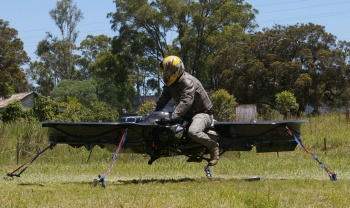 Assuming it’s legit, Chris Malloy’s hoverbike may be the raddest invention since those sneakers that light up.

First, it should be said that I’m not entirely convinced that this hoverbike isn’t a hoax. I’m no aeronautics engineer so the concept of riding around on a couple of giant fans seems possible, but then again most of my concepts of reality are based on the films of the early 1990s.

It also doesn’t help that Malloy is claiming some startling capabilities for his new machine. If he is to be believed, this hoverbike can hit speeds of 170 miles per hour and reach a maximum altitude of 10,000 feet.

Finally, a lack of video footage on the hoverbike’s official site has my cynical Internet geek senses tingling. He does offer a range of impressive photos, and based on the pixels and my having seen a number of photoshops in the past, none seem to have been altered — but again, I’m no expert.

Now, that said, if this machine is real, I’m incredibly impressed. Particularly with how affordable the thing might be if/when it becomes available to the public. From the official site:

As the site points out, here in the US the hoverbike would be classified as an “ultralight,” meaning that prospective riders (pilots?) would not need a pilot’s license.

If your mind is not rapidly filling with horrifying images of hoverbike crashes, congratulations, you live in a wonderful fantasy land.

Now, assuming we can forget about the possibility that this thing is fake, and that the first thing almost everyone would do on it is die horribly, I think we can all see how impressive this invention is. Next to incredibly attractive blonde women and Paul Hogan, this may be the greatest thing Australia has ever given the world.

It sure beats Vegemite.

Australia Bans Dead or Alive: Dimensions After All