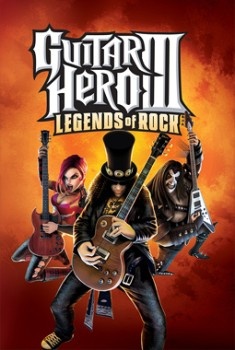 Guns N’ Roses frontman Axl Rose has ripped on Activision for using the band’s songs in Guitar Hero without his authorization.

In a long, rambling message to fans posted on mygnrforum.com, Rose seems displeased with the appearance of Guns N’ Roses tracks, in combination with former GnR guitarist Slash, in Guitar Hero. He doesn’t specifically threaten legal action, but he does allude to some “sorting” of the matter in the future.

“[His appearance] doesn’t bother me unless it’s being done at my expense or to keep him associated [with GnR], as in Guitar Hero,” Rose wrote in his message, which I’ve edited somewhat for readability but is nonetheless still a bit tricky to follow in spots. “Him being in Guitar Hero is fine but not when Activision is using “Jungle,” having Yahoo use “Sweet Child” unauthorized, claims no involvement with Slash, his or anyone’s image or VR or anyone or anyone’s music in either camp in promotion or commercials, etc. I wasn’t broadsided. I read about it as it moved along but Activision continually denied it, right up to the release. That’s some low-life chicanery on all their parts.”

“Yes, Slash was in Guns and on “Jungle”… and he has rights to perform it but not to be represented in this context in association with Guns,” he continued. “And since they weren’t granted the license it’ll take some sorting. Universal has Guns under contract but I own the name.”

Guns N’ Roses was formed in the mid-80s and released its first full album, Appetite for Destruction, in 1987. After a slow start, the album grew into a monster hit, spawning singles like “Welcome to the Jungle,” “Sweet Child o’ Mine” and “Paradise City.” Follow-up releases G N’ R Lies, Use Your Illusion I and II and The Spaghetti Incident? also met with success, but by the mid-90s the band was on the verge of implosion, according to reports mainly due to conflicts between Axl and everyone else. By 1997, Rose was the only original Gunner left in the band; the majority of the group, including Slash, bassist Duff McKagan and drummer Matt Sorum, eventually came back together as Velvet Revolver, while Rose has spent the last dozen years or so working with various musicians on Chinese Democracy, which was released in November.

Slash appeared on the cover of Guitar Hero III: Legends of Rock, which also featured the Guns N’ Roses hit “Welcome to the Jungle.” Whether or not the context of his appearance is “in association with Guns,” however, is debatable. We’ll be watching for Axl’s next move.